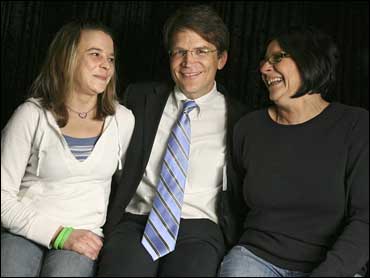 Matt Jones, a father of five from Northern Michigan, had always been known as a guy with a big heart.

"If you've got the ability to do so, why not?" Jones says.

But two years ago, he gave really big, donating his kidney to a complete stranger, reports CBS News correspondent Michelle Miller. There was one condition: the recipient had to find a donor for someone else.

"It was a huge gift," said Barb Bunnell, who received Jones' kidney. "Because of Matt, I was able to be transplanted before going on dialysis."

Bunnell was the first recipient. And thus began the longest kidney donor chain in history, written up in this week's New England Journal of Medicine. Since 2007, ten people have received new kidneys from living donors.

With the help of a computer matching program, Jones flew to Phoenix to help Bunnell. In turn, her husband Ron gave his kidney to Angie, in Ohio. Angie's mom, Laurie then donated her kidney and on, and on it went, spouses, parents, even friends paying it forward.

"(There is) a risk that somebody might renege and might not pay forward the gift that's been given to them," said Dr. Rees, who founded the Alliance for Paired Donations.

So far, no one has broken the chain, Miller reports.

"When you're a mom, you do what ever you can for your children," said Laurie Sarvo, donor number three in the chain.

Sarvo knows without the chain her daughter Angie wouldn't alive.

"It gave me my life back," says Angie Heckman. "Things I coudn't do before, I'm back in school, I can go anywhere I want now and not worry about dialysis."

CBS News brought them together again today, the pioneering doctor and three links in his chain, so connected, they went to Jones' wedding last June.

"Everyone has a different story but they're all incredible," her husband Ron said.

Jones hopes more donors will be inspired to give a kidney.

"Seeing somebody come back from looking literally dead to being full of life - I'm hoping to see more people in the future experience that," he said.
By Michelle Miller