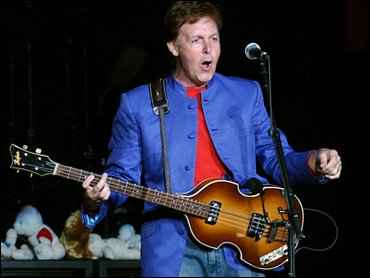 Paul McCartney is releasing a new DVD, a special project he produced with his late wife, Linda. The Early Show National Correspondent Hattie Kauffman sat down with the former Beatle to discuss animated movies for children.

When people hear that McCartney's got a new DVD, they may think rock 'n' roll concert.

"Not this time, no," confirms McCartney. "And you're right, because people who know me for another thing – live music, rock 'n' roll or whatever – some people were saying to me, 'What were you on when you wrote that, man?' … I said, 'No, it's just for kids!'"

The DVD features three animated short films with original music written by McCartney, and he did most of the voices himself – Rupert the bear and Froggy the frog among them. "I'm cheap," he explains, tongue-in-cheek. "I don't cost as much as other people."

Does he find himself doing the voices at home?

Heat Is On For 'Amazing Race 5'

McCartney wrote and produced two of the animated films with his late wife, Linda, whose life was cut short when she died of breast cancer in 1998. Linda does one of the voices, for a character named Wilamena.

But Linda did not get to see the project through.

"She saw the Rupert piece. That was done," says McCartney. "But she didn't get to see the others. They were made just after I'd lost her. Her passion was one of the reasons these films got made, so it seemed like the right thing to do."

If the films have a message, it is: Be kind to animals, something Linda McCartney advocated all her life.

He recalls that, when Linda would see a real frog, other women would be afraid to pick it up. Not Linda. In her view, "it was cute. It's a cute frog."

The films involve danger and magic. They are three separate stories and, yet, they have in common…frogs!

"That wasn't intentional," says McCartney. "Showing this fascination for frogs, for some unknown reason."

When Kauffman jokingly asks him if he has seen a therapist for that, McCartney replies, "I'm currently seeing a frog therapist. He's great. He's big, green, poppy eyes – great guy!"

He always has been known for that sense of humor. It was evident even four decades ago when, at one of their press conferences, a reporter asked: "Who came up with the name 'Beatles' and what does it really mean?"

And Paul quipped, "The Shoes. See, we could have been called the Shoes, for all you know."

No, it wasn't the Shoes, but the Beatles, who turned the world upside down with their music.

And, at 60-plus, Paul McCartney is still rocking our world.

"And then I get to play to these beautiful audiences who give this fantastic feedback, so I love it," he says. "I'm not jaded at all. And, as you say, I'm very lucky because I get to explore other projects like the animation… Well, I just love it. I was quite imaginative as a kid. Probably should have concentrated a bit more in school. That was always on my report: 'Could do better, if he'd concentrate.' Ha ha."