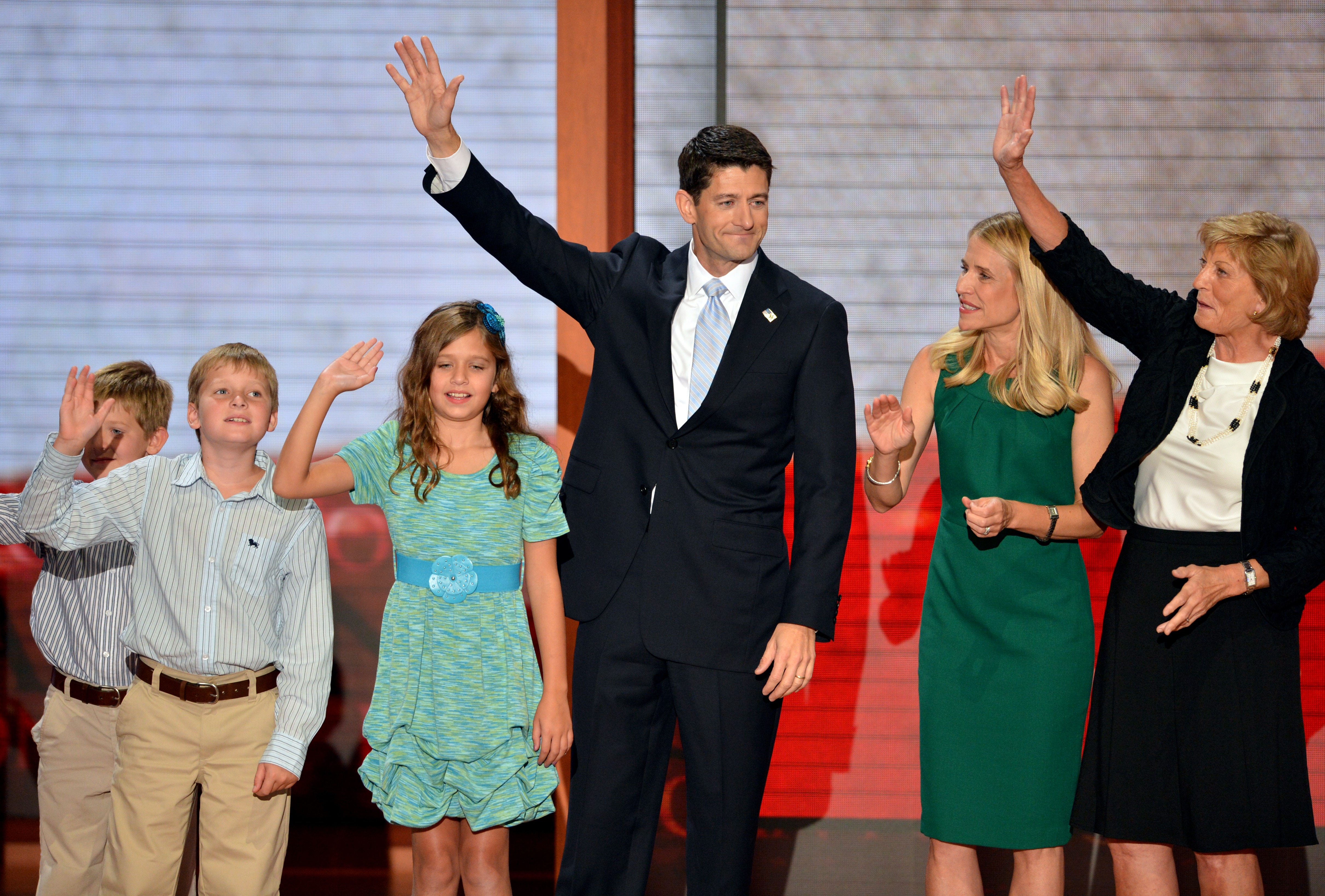 WASHINGTON -- Republican Rep. Paul Ryan is likely to become the next speaker of the House. He's already an unlikely spokesman for balancing family life with work.

A reluctant candidate for the top leadership post, Ryan, 45, made clear this week that he will step up only under several conditions. One of them: reducing the travel time and fundraising associated with the job of House speaker so that he can spend weekends at home in Janesville, Wisconsin, with his wife, Janna, and three school-age kids.

"I cannot and will not give up my family time," he said after a closed-door meeting with House Republicans on Tuesday. "I may not be able to be on the road as much as previous speakers, but I pledged to make up for it with more time communicating our message."

Ryan's comments made him the rare Republican, and man, to spotlight the difficulties of balancing the demands of work life and family in an increasingly fast-paced world.

"Three cheers for Paul Ryan," said Anne-Marie Slaughter, a former State Department official and author of an attention-getting 2012 essay in The Atlantic on leaving her high-level job to head home to her husband and two boys. She said she is pleased that a high-profile man is shedding light on the issue.

"He'll reinvent the job," Slaughter said in an interview Wednesday. "We'll see how he does it."

Not everyone is pleased with Ryan's approach. It has met with resistance from some conservatives, inside and outside of Congress, who said being speaker requires total commitment.

Rep. Tim Huelskamp, R-Kan., a member of the hardline Freedom Caucus, said he has concerns about Ryan's conditions on family time.

Another Freedom Caucus member, Rep. Mick Mulvaney, R-S.C., said most members won't fault Ryan for wanting that family time and that it probably won't be a determining factor in whether he becomes speaker.

"At the same time, we all know that this job by its very nature takes certain sacrifices and if you want to move up the ladder, it takes more sacrifices," Mulvaney said.

Other Republicans balked at anyone who would question Ryan's request. Oklahoma Rep. Tom Cole, a Ryan supporter, said home time would give Ryan balance.

"Look at how productive he's been," Cole said. "Anybody making a point like that probably hasn't chaired two committees, written four budgets that passed, run for vice president of the United States and now being in a position to be speaker of the House. The guy's not an underachiever."

Groups that have advocated for better family leave policies were quick to praise Ryan for talking about spending more time with his children - and quick to criticize him for not being supportive enough of leave for others. Several advocacy groups pointed out that Ryan twice voted against legislation that would have given federal employees paid parental leave.

The group Family Values @ Work said that most Americans don't have the resources Ryan does to demand more family time.

"We urge Rep. Ryan to expand his gaze from his own family to those of the entire nation," said Ellen Bravo, the group's executive director.

Sen. Elizabeth Warren, D-Mass., chimed in with a tweet: "Family time should not be a privilege reserved for the Speaker of the House. You deserve it - and so does everyone else."

Slaughter said Ryan's demands are particularly influential because he is a man. Women often face scrutiny for saying the same things, she said.

"If Nancy Pelosi said that, it would be all over," Slaughter said.

As Ryan has weighed a run, current GOP leaders said they were working to convince him that the family time would not be a problem.

"I think there's a way to do that," outgoing House Speaker John Boehner, known for his prolific fundraising, said on Wednesday. "And I frankly outlined over the last week or so a way that Paul could do this differently than the way I did it."

Louisiana Rep. Steve Scalise, the No. 3 Republican in House leadership, told Ryan in a phone conversation recently that he tries to keep weekends free by fundraising on Fridays or on weekdays during periods when the House isn't in session.

The next weekend Scalise texted Ryan a photo of himself and his two children, covered in Silly String at a local festival.