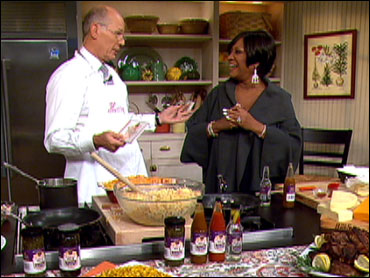 Patti LaBelle, already a superstar singer, is seeking to make her mark in the culinary world.

The Grammy-winner is launching a brand called "Patti LaBelle -- Good Life" with a line of hot sauces and relishes, to be followed early next year with her third cookbook and an instructional cooking CD.

She's a whiz in the kitchen, as she's already demonstrated on such programs as "Oprah" and "The Martha Stewart Show."

After passing out on stage during a concert more than 12 years ago, LaBelle was diagnosed with diabetes. Since then, she's become a spokesperson for the American Diabetes Association, and published two best-selling cookbooks, "Recipes to Sing About," and "Lite Cuisine," targeted at people with diabetes, containing low-sugar and low-fat recipes.

In 2005, LaBelle began appearing in ads for a company that makes blood glucose monitoring systems for people with diabetes.

Since being diagnosed, LaBelle got serious about controlling her blood glucose levels, eating a healthy diet and exercising regularly, while maintaining an active schedule of performances.

She released an album, "The Gospel According to Patti LaBelle," whose proceeds go to cancer research.

LaBelle has a Christmas CD out, her first in two decades. It contains classics and new songs.

The new cookbook will contain recipes and anecdotes that reflect LaBelle's philosophy that good cooking and entertaining come from the heart.

LaBelle spoke about it all onThe Early Show Thursday, and prepared Macaroni and Cheese with Lobster and Shrimp.

Macaroni and Cheese with Lobster and Shrimp

Saute the shrimp and the lobster with one tablespoon of olive oil and the fresh garlic until the shrimp are done.

Bring a large pot of salted water to a boil over high heat. Add one tablespoon of oil, then the elbow macaroni, and cook until the macaroni is tender (not soft), about 7 minutes. Do not overcook. Drain well. Return to the cooking pot.

In a small saucepan, melt one or two sticks of butter. Stir into the pot containing the drained macaroni. In a large bowl, mix the Muenster, mild and sharp Cheddar, Monterey Jack, Provolone and Mozzarella cheeses.

To the macaroni, add the shrimp, lobster, half-and-half, 1 1/2 cups of the shredded cheese, the cubed Velveeta, and the eggs. Season with the seasoned salt, pepper and LaBelle No. 5 Mild Pepper Sauce. Mix all the ingredients together.

Bake until it's bubbling around the edges, approximately 40 minutes.

Top Ten Towns In Which To Raise A Family

Jim Parsons: I'm not as smart as Sheldon