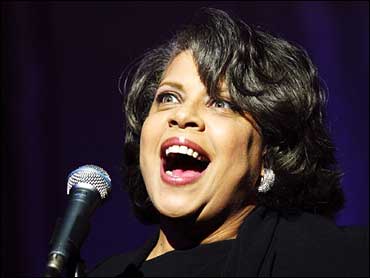 If anyone deserves to be salty about a lack of career recognition, it's Patti Austin.

The 56-year-old singer, who grew up in the business and had Quincy Jones and Dinah Washington as godparents, is renowned for her voice — elegant and sumptuous, refined yet soulful. She has charmed millions through pop hits (the classic "Baby Come To Me" with James Ingram is arguably her biggest hit), commercial jingles, R&B albums and jazz discs.

But unlike, say, Diana Krall, Austin doesn't have a Grammy or a platinum album. And unlike Madeleine Peyroux, she isn't a top-seller among the Starbucks set. She's far from a household name, even though it seems that she should be — a rare mainstream profile by "60 Minutes II" a couple of years back lamented that Austin was one of music's underappreciated treasures.

"She has the respect of her peers," says Michael Abene, a longtime collaborator and producer of her latest record, "Avant Gershwin." "The public doesn't know her as well, (though) they've probably heard her a zillion times, either on commercials or heard her recordings."

"She's covered all these bases and she does them so well," he adds. "It's extremely difficult what she does although she makes it sound so comfortable."

Yet if you expect to hear Austin pull a Kanye West and bemoan that she hasn't been rewarded enough, you'll be disappointed. Though she's remarkably candid about some of the reasons why she's not achieved mainstream stardom and deliciously dishy at times when talking about her fellow performers, bitter she is not.

"I don't think you can live your life in this business a) wanting to be a star, b) wanting to be famous or c) wanting to be awarded on an awards show," says Austin, the daughter of a jazz musician, relaxing on a couch at her manager's office.

"I get awarded and rewarded when I walk into a studio with the baddest musicians in town and we click and make music ... THAT'S validation. Or when someone gets on the phone and says I want to work with Patti because she's all that. THAT'S validation."

The validations have only become more frequent for Austin. In March, she released the acclaimed "Avant Gershwin," a tribute to the music of the songwriting great with loving interpretations of some of his tunes — even "Swanee," a celebration of the South that many blacks wouldn't think of in loving terms, given that Al Jolson popularized it by singing in blackface.

But Austin notes that despite a complicated relationship blacks have had with the South, the love remains — and points to a reverse migration by many blacks to the region. Her reinterpretation underscores that love in a poignant, redemptive way.

"To me, that song is really about that love affair, but it's something that we've never been able to claim," she says. "I was just all about trying to bring it into today and give an anthem to the South."

Austin has become an expert in spotlighting music of the past. Her 2002 album, "For Ella," reinterpreted songs made famous by the first lady of jazz, Ella Fitzgerald.

Though Austin's albums prior to that had been more R&B-based, it was part of her "10-year-plan" to pay tribute to jazz greats — Duke Ellington is next on the list.

"For Ella" became an unexpected critical and commercial hit in the jazz world, and gave Austin more exposure than she had enjoyed in years, even penetrating the tough-to-crack symphony markets, where she is beginning to perform on a regular basis.

"The stars aligned with that project, because we weren't anticipating any kind of major sales from it. It's very specific, it's for a very specific audience ... We knew it was not going to be like, 'Thriller,'" she says, breaking out into a laugh.

It was even nominated for best jazz vocal album, but she would lose to Krall's "Live in Paris." Had she won, it would have been her first Grammy.

"We milked that as much as we could until Diana Krall beat me, that little Canadian turkey," she jokes, breaking out into giggles.

While winning a Grammy would have been another boost to her career, it's not a trophy that Austin is yearning to have on her mantel: "Look at the list of the people who never won one. It's a much bigger one than (the one) of people who have."

Austin is just as succinct when asked why she hasn't attained the success of some of her counterparts.

In some ways, Austin's weight may have precluded her from attaining greater success — though attractive, throughout most of her career she was heavyset. These days, Austin is looking svelte and sexy — thanks to gastric-bypass surgery, which helped her shed more than 100 pounds. More importantly, it helped her get rid of health problems like type-2 diabetes, which is why her doctors urged her to get the procedure done.

"Of course it affects your career negatively," says Austin of the years she carried excess weight. "It matters. I'm in L.A. You can't be small enough ... you can't be beautiful enough. It's all about being physically magnificent ... Nobody asked me to do the cover of 'Jet' until I lost 145 pounds."

But Austin says she's glad she has lost the weight at this stage of her career, in her 50s, instead of spending her youth worried about trying to conform to society's standards. She remains bewildered at some of her fellow baby boomers, still searching for that fountain of youth.

"When I got my AARP card in the mail, I was doing the happy dance," she laughs. "Old? Forget old — let's work on wise. Is there no joy about wisdom anymore in our culture and our lives? Justin (Timberlake)'s bringing sexy back? I'm bringing wisdom back!"
By Nekesa Mumbi Moody