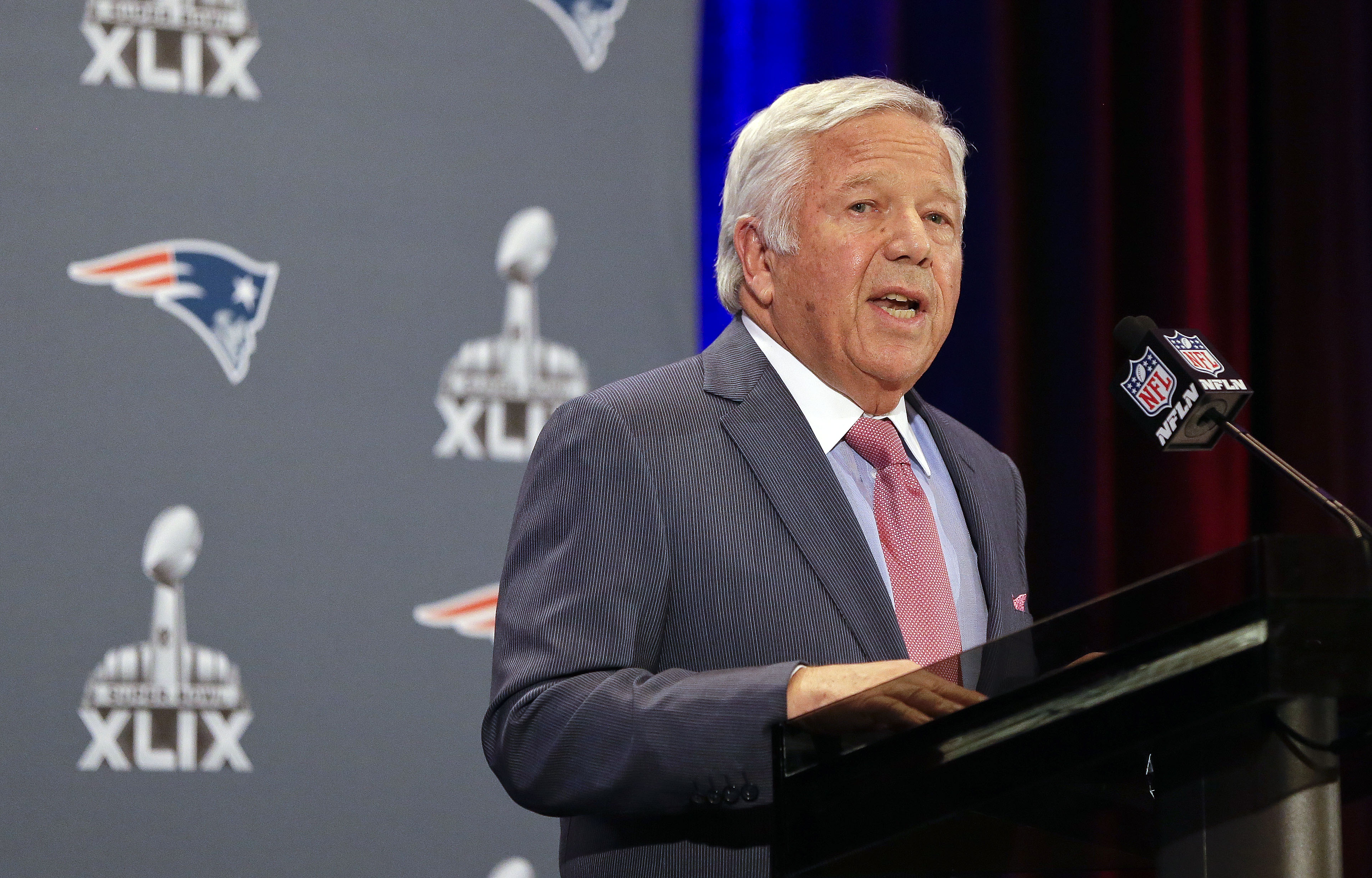 CHANDLER, Ariz. - New England Patriots owner Robert Kraft demanded an apology from the league once the Patriots are found to be not guilty of breaking any rules regarding using under-inflated footballs in the AFC championship game.

A conclusion Kraft is certain will occur.

"I believe unconditionally that the New England Patriots did nothing wrong in this process that was in violation of NFL rules," Kraft said at the team's first media availability in Arizona.

"If the (Ted) Wells investigation is not able to definitively determine that our organization tampered with the air pressure in the footballs, I would expect and hope the league would apologize to our entire team, and in particular to coach (Bill) Belichick and Tom Brady, for what they've had to endure this week," Kraft added, at times sounding angry.

"I'm disappointed in the way this entire matter has been handled and reported upon. We expect hard facts rather than circumstantial leaked evidence to drive the conclusion of this investigation."

The NFL has said evidence shows the Patriots used underinflated footballs during the first half of the AFC title game victory over Indianapolis. The league is still determining why the balls were underinflated.

NFL Executive Vice President Jeff Pash and Ted Wells of the law firm of Paul Weiss are leading the probe. Wells was the investigator in the Miami Dolphins bullying scandal and has said the current investigation could last a while.

Belichick and Brady followed Kraft to the podium, but basically left any comments on the investigation to their boss.

When asked if he was upset by the accusations and jokes of which he was the subject, Brady said: "I've moved past those initial feelings and I want to move forward."

But moving away from the deflated footballs theme will be particularly difficult on Tuesday, which is media day, when just about any question has been fair game in the past.

So Kraft came out swinging before then with a speech tinged with emotion - and fire.

"Tom, Bill and I have been together for 15 years. They are my guys," said Kraft, who has three Super Bowl titles and three other trips to the big game since 2001.

"They are part of my family. Bill, Tom and I have had many difficult discussions over the years. I've never known them to lie to me. That's why I'm confident in saying what I just said.

"It bothers me greatly their reputations and integrity - and by association that of our team - has been called into question this week."

This hardly is the first time the Patriots have been under such scrutiny. Most famously was 2007, their undefeated regular season. Revelations that New England videotaped New York Jets coaches' signals during a game cost Belichick a $500,000 fine, and the team was fined $250,000 and stripped of its 2008 first-round draft choice by the NFL.

During this year's playoffs, Ravens coach John Harbaugh accused the Patriots of being deceitful with some alignments on offense. The NFL exonerated Kraft's team of any wrongdoing.

Now, Kraft has taken the offensive.

"I, and our entire organization," he said, "believe strongly in the integrity of the game and the rules of fair play are properly, equitably and fairly enforced."