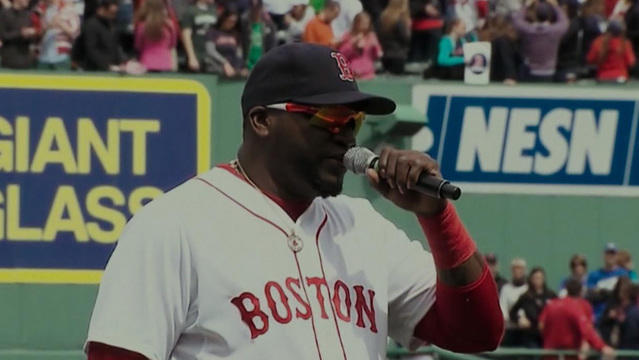 The new movie “Patriots Day” shows the story of the 2013 Boston Marathon bombings and the manhunt that followed. Filmmakers invited “CBS This Morning” to Boston last May as they shot one of the most closely-guarded scenes at Fenway Park.

In the heart of Boston, standing on hallowed ground that is forever a part of the city’s soul, Red Sox slugger David Ortiz and actor Mark Wahlberg prepare to shoot a pivotal scene in the movie, “Patriots Day.”

Fan favorite “Big Papi” is used to spending his days at Fenway Park, reports CBS News’ Dana Jacobson. Ortiz’s majestic home runs have cemented his status among Boston sports legends. But today, it’s the power of his words not his swing that matters most.

Just five days after the marathon bombing, Big Papi stood on the pitcher’s mound at Fenway. His delivery perfect, not only speaking to Boston, but for it.

“I speak from my heart. It wasn’t something that -- I never planned it. I never wrote it,” Ortiz recalled. “I was just speaking just like-- like, I know the citizens were suffering.”

“Chills. I got chills,” Berg said.

“I could tell how upset he was. He knows how resilient the people of Boston are and that Boston Strong is something now that the world got to see,” Wahlberg said.

We tucked in behind the crew as cameras roll in a tunnel leading to the real Fenway Park.

From there Ortiz walks out to give his now-famous 54-word speech. Instead of trying to recreate the moment, the movie cuts to actual game footage.

“This is our f****** city. And nobody gonna to dictate our freedom. Stay strong,” Ortiz said.

The filmmakers didn’t want the movie to just be about the bombing, they also wanted to show hope.

“Well, he really summed it up better than anybody when he talked about how the city was feeling about what had happened. And this movie is about good overpowering evil and love being stronger than hate,” Wahlberg said.

Ortiz said he thought it was an “unbelievable opportunity.”

“I was more than happy to do it. I mean, I would do anything for this town,” Ortiz said.

“I take it, where I come from very seriously. And I know that I would be held accountable by everybody if I didn’t get it right,” Wahlberg said.

Wahlberg said one of the biggest challenges for him was “staying in the moment.”

“I get so overwhelmed with emotion when I think about all of the families and all the victims. In my script, I have pictures of everybody. You know, just reminding of, you know, the responsibilities that I carry,” he said.

Berg is aware of the criticism they face from locals who don’t want Hollywood to profit off tragedy or feel it’s too soon to dramatize.

“To people that think it’s too soon, what do you say?” Jacobson asked him.

“Mark and I, you know, we were talking about it. … Mark said, ‘I think we might be too late. It can’t be too soon,’” Berg recalled.

“How can it be too soon to showcase the spirit and the love that this city responded with, particularly when we look at what’s happening, you know, it seems every month now somewhere in this world? … People are saying, ‘Why? For what? How can we stop it?’ And I don’t have the answer to that. But we do see regardless of what happens and what they do to us, love seems to triumph. And that, I don’t think it’s too soon for that.”

When we visited the movie shoot at Fenway, Ortiz was at the beginning of his farewell season. While we were talking with Wahlberg and Ortiz, we watched a mega movie star turn into a mega fan, even suggesting a new eight year deal instead of retirement.