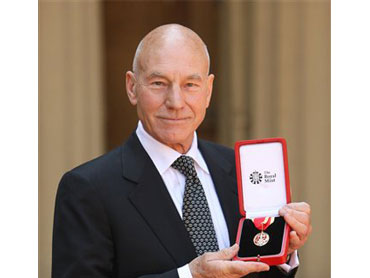 Patrick Stewart has been upgraded from captain to knight. The actor famous for playing Capt.Jean-Luc Picard on "Star Trek: The Next Generation" officially became Sir Patrick Stewart when he was knighted by Queen Elizabeth II at Buckingham Palace on Wednesday.

While "Star Trek" introduced him to a different group of fans, Stewart is also a widely respected stage actor. The 69-year-old actor discovered the theater as a child, and said "my heroes were Sir Laurence Olivier, Sir John Gielgud, Sir Alec Guinness."Being in that company is the grandest thing that has professionally happened to me."

Stewart joined Britain's storied Royal Shakespeare Company in his 20s, and in 2008 was nominated for a Tony award for the leading role in "Macbeth."