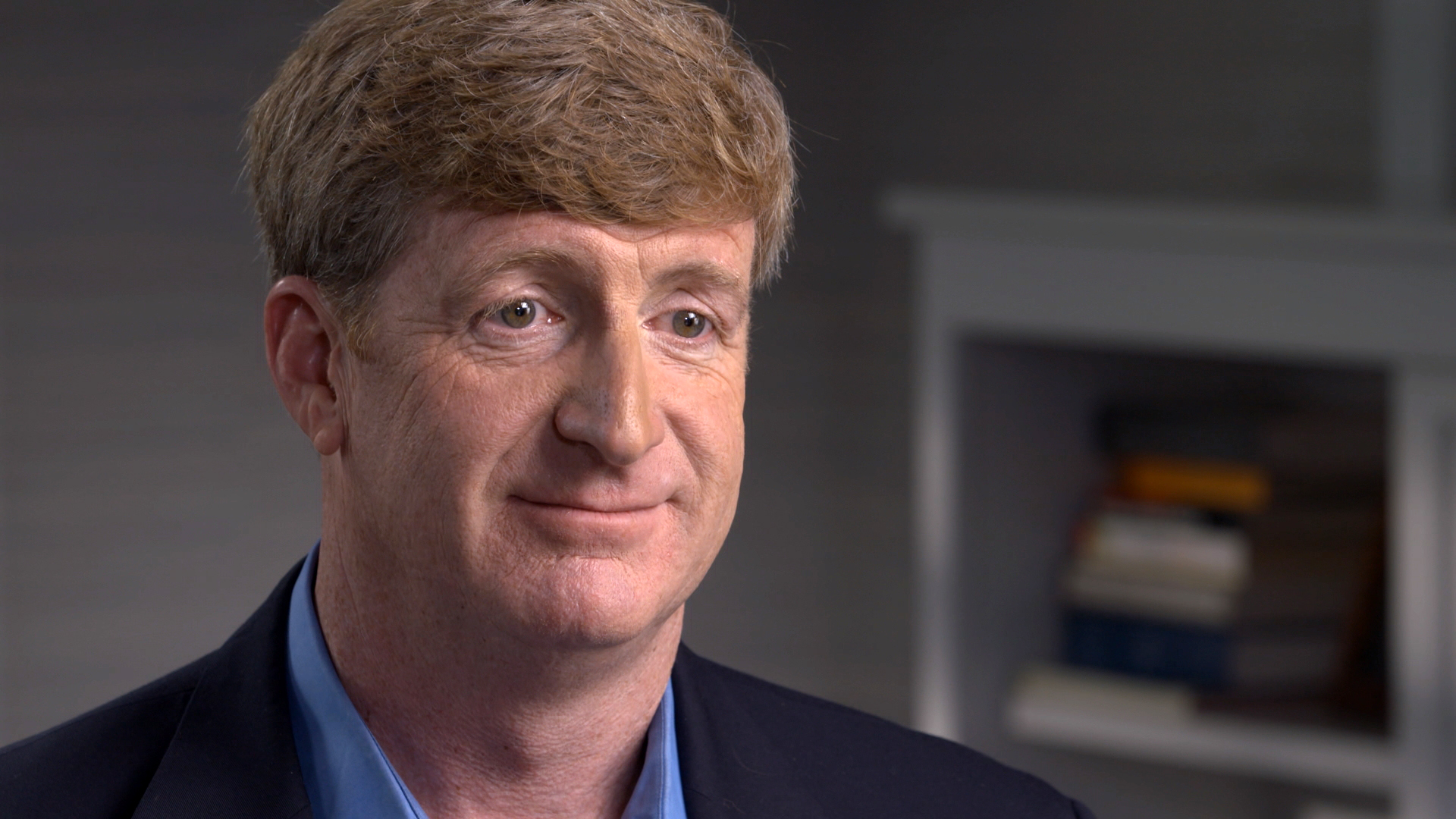 The following is a script from "Patrick Kennedy" which aired on October 4, 2015. Lesley Stahl is the correspondent. Rich Bonin, producer.

The youngest child of Senator Ted Kennedy, Patrick Kennedy was supposed to be the heir apparent to a political dynasty. But after his father died, Patrick resigned from Congress and is now leading a political movement to change the way people view and talk about mental illness and addiction, that he himself suffers from. He says they're medical issues, not moral issues or character flaws. And he wants them treated with the same urgency we treat cancer and heart disease.

Now nearly five years sober, he has written a memoir, "A Common Struggle," in which he traces not only his struggles but those of his famous father and mother, revealing details about them that not everyone in the family wants revealed and some may dispute. His purpose, he says, is to show that when people have these illnesses being silent about them is almost as bad as the disease.

Patrick Kennedy: It's a conspiracy of silence, not only for the person who is suffering, but for everyone else who's forced to interact with that person. That's why they call this a family disease.

Lesley Stahl: And you're trying to take the stigma away?

Patrick Kennedy: Well, I'm trying to figure how do we move this away from shame and stigma into a honest to God political movement. This isn't something esoteric about trying to take care of that alcoholic. "God, don't tell me those people need us to spend money on them?" It's about taking care of all of us. Because these are Americans.They're dying every day. And they're our brothers and sisters.

"It's a conspiracy of silence, not only for the person who is suffering, but for everyone else who's forced to interact with that person. That's why they call this a family disease."

He says there's a pathology of silence about mental illness and addiction within families, especially his. In his book, he breaks what he calls the Kennedy code of silence.

Patrick Kennedy: I don't tell in this book about my family stories as some way to talk about their story. This is my story. These experiences are embedded in me. They're who I am.

Lesley Stahl: You write - I'm going to quote you from the book: "My father went on in silent desperation for much of his life, self-medicating and unwittingly passing his unprocessed trauma onto my sister, brother and me."

Lesley Stahl: So, that was the alcohol?

Patrick Kennedy: Yeah, that was the alcohol.

Lesley Stahl: Do you think he was an alcoholic?

Patrick Kennedy: You know, I think he definitely had a problem with alcohol. I still right now, Lesley, have trouble talking about this. This is like breaking the family code here. I am now outside the family line.

Outside the line talking about his dad, but also about the silence surrounding his mother Joan's alcoholism that he says he inherited.

Lesley Stahl: What was it like growing up with your mother?

Patrick Kennedy: It was so tense. My mother clearly would be inebriated and under the influence. She would walk around in the middle of the day, you know, in a terry cloth bathrobe. And the amazing thing is, here you have all of these leading policy makers in the country in and out of the house, coming in and out, watching this and no one's saying a word. The shame just becomes--

Lesley Stahl: You felt the shame?

Patrick Kennedy: Oh my God, I felt like, "Oh, my God, they're going to see. Mom, quick, let's get back into your room. Don't let--" You know, I just understood this was not something that you want anyone to see.

Lesley Stahl: You write as a Kennedy. And it's a unique position that you're in. I kept thinking, you know...probably most families would have acted the way your family did.

Patrick Kennedy: Oh, I know so many of them who can't talk about their own family's illnesses. You get infected by the pathology of silence. And that is sickening to your soul.

He writes that while his mother was crippled by her drinking, his father was reeling.

Teddy was devastated by the assassinations of his two brothers.

Patrick Kennedy: When my Uncle Bobby was killed, it was like absolutely the floor dropped out for my father, absolutely the floor. Because they got to be buddies in the United States Senate. Those were the glory days for my dad. You ever ask anyone, my dad was the happiest he ever was when he had his brother. Then his brother was killed. Boom. Over-- show over.

[Ted Kennedy: Those of us who loved him, and who take him to his rest today, pray that what he was to us, and what he wished for others will someday come to pass for all the world.]

Lesley Stahl: Tell me what's welling up in you. You didn't know Bobby. You were one years old.

Patrick Kennedy: Yeah, but I knew the pain that came from his having been killed, because I saw my father kind of live in silent desperation for most of his life.

Lesley Stahl: Are you weeping for him?

Patrick Kennedy: Oh, yeah, of course, I do. No, I, I absolutely grieve for him.

Lesley Stahl: To this minute?

As people across the country wept for Bobby, the second Kennedy brother assassinated in five years, Patrick writes that the family itself dealt with Bobby's death the only way they knew how.

Lesley Stahl: You actually say that because nobody talked about these things in the family, you were all kind of like zombies. You use that word, "zombies."

Patrick Kennedy: Well, we were living in a limbo land where all of this chaos, this emotional turmoil, was happening. And we were expected just to live through it.

Lesley Stahl: This is the first time a Kennedy has been this open about the family secrets, these particular secrets. Are you worried about how the family's going to react?

Patrick Kennedy: I know how some of them are going to react, cause I've already--

Lesley Stahl: They're not pleased.

Chappaquiddick was something else they couldn't talk about. A year after Bobby's assassination, Teddy drove a car off a wooden bridge, drowning his young passenger, Mary Jo Kopechne. He abandoned the scene and didn't tell the authorities 'til the next morning.

Lesley Stahl: This is where you had the conversation with your dad about--

Patrick Kennedy: This is where I had--

Patrick Kennedy: I guess you could call it a conversation.

On the 10th anniversary of the tragedy, Teddy brought Patrick - then 12 -- to this beach in Hyannis Port specifically to talk about Chappaquiddick, but then didn't.

Patrick Kennedy: I learned more about this by looking in the books and newspapers and articles and on TV.

Lesley Stahl: Do you think Chappaquiddick had an impact on you?

Patrick Kennedy: I couldn't even talk about it. I was hostage to the family code that no, don't say anything about it. Anything you say, it's disloyal. It's against the family code, and it doesn't matter whether it's in a private therapy session. That psychiatrist could go out and tell somebody.

The way Patrick dealt with it was to drink. He was heavily into alcohol by the age of 13.

Lesley Stahl: And nobody in the family either knew or did anything?

Patrick Kennedy: You know, it was ubiquitous. There were, there was alcohol and there's parties all the time. It wasn't like, oh, I stood out.

By the early 1990s, his father's drinking had become so heavy, the family decided to stage an intervention.

Lesley Stahl: Not a word?

Patrick Kennedy: And then he wrote me a letter. And he basically said, you know, "for the time being, you know, don't think of coming by to, you know, visit."

Lesley Stahl: Oh, my word. He stopped talking to you?

Patrick Kennedy: That's the way it came down. He felt that we really had no place, no place whatsoever to question him. That's the defensive position of every alcoholic. Go mind your own business. Back off! That was the message.

Lesley Stahl: You know, there are people who thought of your father, "He thinks the rules don't apply to him." That he can drink and carouse as he was doing, cause, you know, he's a Kennedy.

Patrick Kennedy: Yeah, there's no partying in there. There's no enjoyment.

Lesley Stahl: There was no enjoyment?

Patrick Kennedy: This is about relieving the pain. People have this mistaken notion that you get high. What you're really getting is relief from the low.

When he was elected to Congress in 1994, Patrick was struggling not only with alcoholism but with mental illnesses -- anxiety, depression and bipolar disorder. He was drinking and popping pills at the office.

It all came to a crashing halt, literally, in May of 2006 when he plowed his car into a Capitol Hill police barricade at three in the morning.

Patrick Kennedy: The TV cameras start piling up outside my congressional office. I'm thinking, "This is over."

The next day, he broke through another barrier, the Kennedy wall of silence, going public with the fact that he was an addict. His father was furious.

Patrick Kennedy: He just lashed out. "And these aren't things we talk about in public and, you know, blah, blah, blah."

Lesley Stahl: Teddy Kennedy's son is the poster boy for addiction, oh, no.

Patrick Kennedy: No, no, no.

Teddy's attitude - that addiction was shameful -- was far from unusual for his generation. But his attitude changed when Patrick gave an impassioned speech on the House floor in support of his bill to expand health insurance coverage for addicts and alcoholics.

The speech persuaded Teddy to support the bill. Patrick writes that his father didn't feel he measured up...until then.

Lesley Stahl: This is a huge moment in your life.

Patrick Kennedy: In my life. I mean, who gets to have this experience of coming full circle.

"I am an addict. I'll always be an addict. But I'm an addict in recovery. I count my days. It's one day at a time."

After his father died in 2009, Patrick, at age 43, retired from Congress. A year later, he got married for the first time to Amy Savell a middle-school history teacher.

[Patrick Kennedy on boat: Hold on to her, Harp.]

They have three children...and one on the way. It wasn't until he committed to stop drinking that she agreed to marry him.

[Patrick Kennedy: Welcome to my house.]

Today, they live here in southern New Jersey where he directs his new political movement, what he calls The Kennedy Forum, from his study, sitting at President Kennedy's old congressional desk.

His regimen for staying sober includes an hour-long swim every morning, taking medication for bipolar disorder and daily 12-step meetings. He'll celebrate his fifth year of sobriety next February on his father's birthday.

But he doesn't kid himself. He realizes his diseases are chronic, and not curable.

Patrick Kennedy: I am an addict. I'll always be an addict. But I'm an addict in recovery. I count my days. It's one day at a time.

Lesley Stahl: Is it hard?

Patrick Kennedy: Every day. Some days more than others. But today's a good day.