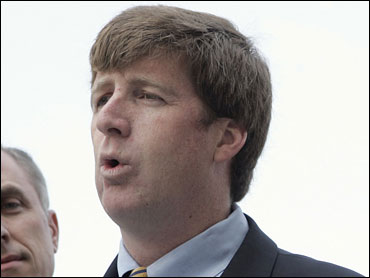 Having long battled alcoholism, bipolar disorder and addiction to prescription pain medication, Kennedy previously attended rehab after crashing his Ford Mustang into a Capitol barricade in 2006.

In a statement released Friday, Kennedy said, "I have always said that recovery is a life-long process and that I will do whatever it takes to preserve my health. In consultation with my doctor, I have decided to temporarily step away from my normal routine to ensure that I am being as vigilant as possible in my recovery."

Since first checking into the Mayo Clinic in 2006, Kennedy has made frequent trips to the clinic for one or two day stays, an aide told CNN. This stay is expected to be longer.

Former aide Sean Richardson told the Providence Journal that he could not pinpoint the specific number of days that Kennedy will stay at the undisclosed rehab facility, though he said the Congressman will be there more than a few days. Richardson said Kennedy will return in time to weigh in on the debate over health care reform.

This will be Kennedy's third recorded stint in rehab. As a teenager, he was treated for a cocaine addiction. In 2000, he was accused of shoving an airport security guard, as well as destroying a yacht.

Kennedy is a leading congressional advocate of mental health programs and has spent eight terms as a representative from Rhode Island.

"I hope that in some small way my decision to be proactive and public in my efforts to remain healthy can help remove the stigma that has served as a barrier for many Americans reluctant to get the help they need," he said.

Kennedy is the son of Massachusetts Sen. Edward Kennedy.