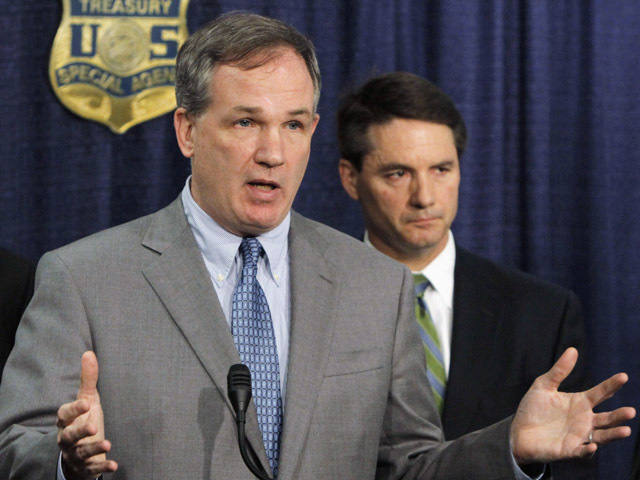 (AP) CHICAGO - Patrick Fitzgerald, known as one of the most relentless U.S. attorneys in the nation and the architect of convictions against two Illinois governors and a former vice presidential aide, announced Wednesday that he is stepping down from the post he has held for more than a decade in Chicago.

His office announced Wednesday that he's stepping down effective June 30.

A statement from his office gave no reason for his decision to leave the presidentially appointed post he has held for Northern District of Illinois since Sept. 1, 2001. It said he did not immediately have any future employment plans and would take the summer off before considering other job possibilities.

Fitzgerald, who is married to a schoolteacher and has two young children, was scheduled to address a press conference on Thursday morning in Chicago.

In the statement, Fitzgerald recalled how upon his appointment he considered the post "one of the greatest opportunities that one could ever hope for."

"I believe that even more now after having the privilege of working alongside hundreds of dedicated prosecutors and agents," he said.

Fitzgerald is leaving the Justice Department after nearly 24 years, including his time as an assistant U.S. Attorney in New York.

As the top federal law enforcement official in northern Illinois, Fitzgerald was at the center of some of the biggest legal stories in the state's history, including corruption convictions against Ryan and Blagojevich. Nationally, Fitzgerald was tapped to be the special prosecutor who investigated the disclosure of the identity of CIA operative Valerie Plame and eventually won a conviction against Libby for perjury and other offenses.

To those he targeted since taking over in Chicago in 2001, Fitzgerald became one the most feared U.S. attorneys in the nation, winning convictions for several city workers and trucking executives, as well as some of top figures in the administration of former Chicago Mayor Richard Daley.

It was his reputation as a hard-charging prosecutor that got him the job in the first place. As an assistant U.S. attorney in New York he successfully prosecuted major terrorism cases, including against those responsible for the 1998 bombing of two U.S. embassies in East Africa and Omar Abdel-Rahman, the so-called "blind sheik," convicted of the 1993 World Trade Center bombing and conspiring to blow up bridges and buildings around New York city.

In 1993, he helped jail a Gambino crime family capo and three other mobsters for murder, racketeering, narcotics trafficking and other crimes. And he supervised the 1996 trial of three men who plotted to blow up 12 airliners.

The statement from his office said Fitzgerald has notified the White House, Attorney General Eric Holder and Illinois' two U.S. senators of his decision.

In Washington, Holder praised Fitzgerald, saying he "served the American people and the citizens of Illinois with the utmost integrity and a steadfast commitment to the cause of justice."

"From his early consequential years in New York City confronting the terrorist threat to his strong leadership of the U.S. Attorney's Office for the Northern District of Illinois, Pat has rightly earned a reputation over these last 24 years as a prosecutor's prosecutor," Holder said.

Fitzgerald, who was intensely private, also built a reputation for leaving his own political leanings out of his work.

U.S. Sen. Dick Durbin noted that Wednesday, saying Fitzgerald was known for his "aggressive prosecution of wrongdoing — including politicians in both parties." Durbin added that Fitzgerald "has given fair warning that no one is above the law."

He also established a reputation for relentlessness.

In the CIA leak case, Fitzgerald tried to force former New York Times reporter Judith Miller to testify before a grand jury, with Miller sitting in jail for three months for refusing to do so. She ultimately relented, saying Libby had given her permission to publish Plame's name. And Fitzgerald brushed off heavy criticism after jurors deadlocked on all but one relatively minor charge during Blagojevich's first corruption trial in Chicago, choosing to hold a second trial and winning a 14-year prison sentence for the ex-governor.

Born in Brooklyn, N.Y., the son of a Manhattan doorman, Fitzgerald spent years advancing his career one criminal case at a time. From the East Coast to Chicago, he earned a reputation as a tough anti-corruption prosecutor who worked, as one observer put it, "28 hours a day."

For more than two years in New York, he was so busy he never got around to getting the gas hooked up to the stove in his apartment.

Fitzgerald's name is repeatedly mentioned as a possible replacement for FBI Director Robert Mueller, who is scheduled to step down next year. And his strong reputation and name recognition could make him an ideal political candidate.

But Fitzgerald, who was appointed by a Republican president, George W. Bush, and has kept his job under a Democrat, Barack Obama, has said he has "no intention of ever running for any office."