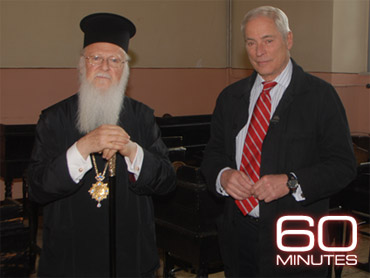 Would it surprise you to learn that one of the world's most important Christian leaders, second only to the pope, lives in a country where 99 percent of the population is Muslim? His name is Bartholomew, and he is the patriarch of 300 million Orthodox Christians. He lives in Istanbul, Turkey, the latest in a line of patriarchs who have resided there since before there was a Turkey, since the centuries following the death of Jesus Christ.

That's when Istanbul was called Constantinople and was the most important city in the Christian world.

His official title is impressive: "His All Holiness, Bartholomew, Archbishop of Constantinople, New Rome, Ecumenical Patriarch."

60 Minutes correspondent Bob Simon first met him in Istanbul. It was Easter, and worshipers from throughout the Orthodox Christian world had come to celebrate Christ's resurrection on the holiest day of their calendar with the man who they see as their pope.

"My first question is this. How should I refer to you? As your all holiness? As patriarch? As ecumenical patriarch? What is the proper way to address you?" Simon asked the patriarch.

"The official title is 'your all holiness,'" he replied, laughing. "But for me, Bartholomew is enough."

For him perhaps, but not for us. And while his all holiness may occupy the Ecumenical throne, his quarters are a far cry from the Vatican.

His office is cramped and relatively austere, his desk littered with papers. No Michelangelos there. All that is left of a Christian empire once ruled from Istanbul is a complex of nine buildings, tightly squeezed onto less than an acre of land.

"Now, is this the Vatican of your church?" Simon asked.

"Well, our headquarters," the patriarch replied.

It's called the Phanar, and it has been the heart of Orthodox Christianity since 1599.

His all holiness promotes an informal atmosphere there: there's none of the ritual that surrounds the pope in Rome. And there is no cathedral - only a modest church. The neighborhood that surrounds it used to be Greek and Christian but today is predominantly Muslim. The Phanar is so small, our tour didn't take long.

It had just ended when a Turkish policeman informed the patriarch that there was a threat on his life. It turned out to be nothing, but church officials say previous threats have been serious enough that the Phanar is surrounded by barbed wire and cameras and the patriarch has 24-hour protection.

"I think a lot of people would want to know, your all holiness, why the leader of so many millions of Orthodox Christians in the world lives in a country that is 99 percent Muslim?" Simon asked.

"Because we are here before this country becomes a Muslim country, much earlier. Since ever. Since the very beginning," the patriarch explained.

Asked since the beginning of what, Patriarch Bartholomew said, "Of the foundation of our church, of the Church of Constantinople."

And in the beginning Istanbul was called Constantinople, the ancient city on the Bosporus where east meets west. The city's skyline is dominated by minarets; at Friday prayers, the mosques are teeming.

But the city's richest and most renowned Christian churches are museums today, Meccas for tourists, not for worshipers. There's the Chora Church, with its fresco of Jesus whose eyes seem to go right through you, and he Hagia Sophia, the first great church in Christendom and an architectural wonder built 1,000 years before Saint Peter's Basilica in Rome, and for centuries the most important church in the Christian world.

Fast forward a few centuries and it's hard to find Christians in Istanbul. One local church 60 Minutes visited holds 500 people, but during its Sunday service its pews were practically empty. It was the same everywhere we went.

At the turn of the last century there were nearly 2 million Orthodox Christians in Turkey; 1.5 million were expelled in 1923, and another 150,000 left after violent anti-Christian riots in Istanbul in 1955.

Today, in all of Turkey, there are only 4,000 Orthodox Christians left.

Patriarch Bartholomew told Simon the Orthodox Christians in Turkey are treated as second-class citizens. "And we don't feel that we enjoy our full rights as Turkish citizens," he said.

"If you're treated as second-class citizens here and you are Greek, why don't you go to Greece?" Simon asked.

"Because we love our country. We are born here. We want to die here. We feel that our mission is here as it has been for 17 entire centuries," the patriarch explained. "And I wonder why the authorities of our country do not respect this history."

To better understand the patriarch's frustration, he suggested we head off on our own mission, 500 miles east of Istanbul to a region called Cappadocia. We launched our search for this Christian history in a hot air balloon and came upon one of the most bizarre and dramatic landscapes on Earth: from above the clouds, it looks like a city of stone. And when you approach the cliffs, you see doors and windows carved by hand into the rock eons ago.

It's extraordinary enough from the outside, but open one of the doors and step inside and you enter a world of unfathomable beauty. There are chapels with frescos painted while Rome was still ruled by the Caesars and Bethlehem and Nazareth were dusty little towns.

"Are there any Christian remains as old as this in the Holy Land, in Jerusalem or Bethlehem?" Simon asked our guide, Sevim Karabiyik.

"Not that I know of," Karabiyik replied.

Karabiyik told us, much to our surprise, that the four gospels were written in Turkey and that three of the apostles spread the word there.

There are hundreds of these churches in Cappadocia, where Christians sought refuge from persecution. The oldest was built in the 5th century, when Christianity was in its infancy.

"Do you think many Christians realize that it all started here in Turkey?" Simon asked Karabiyik.

"Personal experience? No," she replied.

"It all started in the Holy Land…because that's…where Jesus is…from. 'Cause nobody…disputes that. But the Christian religion began in Turkey," Simon pointed out.

"In Anatolia, in Turkey," Karabiyik said.

The patriarch then sent us to the depths of the Sinai Desert in Egypt, to a Greek Orthodox monastery where early Christians also sought protection. It's called St. Catherine's, and it is located at the foot of Mt. Sinai where, according to tradition, Moses received the Ten Commandments.

It is the oldest functioning monastery anywhere. There are 25 monks there today, servicing the smallest diocese in the world.

The monks are all Greek, with one exception: there is Father Justin, a converted Baptist from El Paso, Texas.

Father Justin, the chief librarian, oversees an incomparable collection of ancient manuscripts. "Most of these date from the 10th to the 14 century," he explained.

Then he took us to what the patriarch really wanted us to see: a little-known letter written by the Prophet Mohammed, almost 1,400 years ago, signed and sealed with his hand print, offering protection and religious freedom to the Christians of the monastery.

"These are precedents from Mohammed himself for toleration and peace among people of differing faiths," Father Justin explained.

The patriarch then brought us back to the 21st century and Turkey, to his own back yard. He took us for a ride on an island off of Istanbul in a carriage, with a police escort. The patriarch wanted to show us that Mohammed's message of tolerance has not been received by the Turkish authorities.

His prime example is the Halki School of Theology, the only Greek Orthodox seminary in Turkey. Empty and abandoned, there are no priest and no prayers.

The Halki was closed down by Turkish authorities after passage of a law banning private higher education. That was back in 1971.

"It's a pity and a shame. It's a crime to keep such a school closed, unused, for no reason. Why?" the patriarch asked.

"Reasons of state," the patriarch replied.

As a consequence, the church can't train new priests - potential new patriarchs who, under Turkish law, have to be born in Turkey. It's as if Rome closed down the College of Cardinals.

The hallways where 100 young seminarians roamed are desolate now; the library's priceless collection of old manuscripts lies untouched. Walk into a classroom and it seems as if the students had just gone home today, not 38 years ago.

"This school prepared people who preached peace, preached unity, preached love. So not giving to the church the possibility to prepare these people, we offend human dignity," Patriarch Bartholomew told Simon.

The patriarch says it not only offends human dignity, it offends him personally because this is his alma mater.

The patriarch was born Dimitrious Arhondonis in Turkey. Like all Turkish citizens, he served in the Turkish army. He was ordained at the age of 21 and elected ecumenical patriarch in 1991. But the Turkish government does not recognize the ecumenical or international part of his title. To them, he is merely a local bishop.

"I have visited the prime minister, submitting our problems, concrete problems, and asking why, and asking to help us," the patriarch said.

Asked if he got answers, Patriarch Bartholomew said, "Never."

"Do you sometimes fear that the community will be wiped out?" Simon asked.

"Not really," the patriarch replied. "We survived. We do believe in miracles."

And that, the patriarch says, is because Turkey is also the Holy Land, spiritually not very far from Jerusalem.

"This is the continuation of Jerusalem. And for us, it is equally a holy and sacred land. We prefer to stay here, even crucified sometimes. Because in the gospel, it is written that it is given to us not only to believe in Christ, but also to suffer for Christ," the patriarch said.

"You said even to be crucified sometimes?" Simon asked.

"Yes. Because we believe in the resurrection. After the crucifixion, resurrection comes," the patriarch explained.

Asked if he personally feels that he is being crucified sometimes, Patriarch Bartholomew told Simon, "Yes, I do."