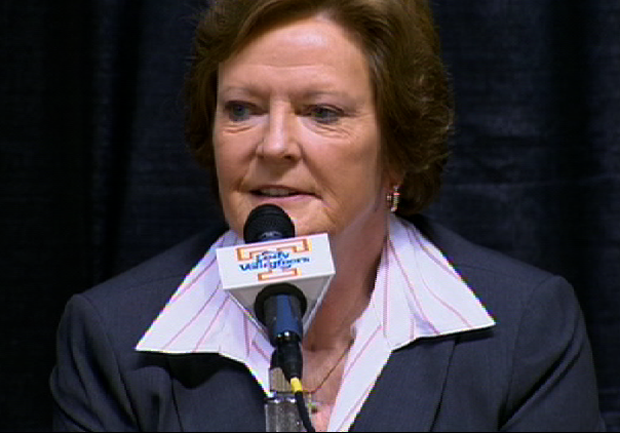 (CBS/AP) KNOXVILLE, Tenn. - A relaxed and smiling Pat Summitt said it's been a "great ride" and it is the right time for her to step down after coaching the Tennessee Lady Vols for nearly four decades.

"It has been a privilege," the Hall of Fame coach said Thursday during a press conference. Summitt's longtime assistant Holly Warlick has been promoted to replace her.

"I just felt like it was time for me to step down knowing that Holly was going to be in great hands," said Summitt, who revealed on Aug. 23 that she had been diagnosed with early onset dementia, Alzheimer's type. "She's a great coach and you know I'm going to continue to support her. You know It's never a good time but you have to find the time that you think is the right time and that is now."

Summitt, who won more games than anyone else in NCAA college basketball during her 38 years at Tennessee, discussed the decision to step aside on the court named for her after her 1,000th win.

"It was really a great ride for me," Summitt said.

She will assume a new role as head coach emeritus and report to athletic director Dave Hart.

"I made a choice early in my career to challenge myself to step up my game each and every day," Summitt said. "You can be sure I will take this same attitude into my new role as head coach emeritus and continue to teach our players the same commitment. I can promise you ladies I'm here for you. Trust me that that will happen."

The 59-year-old coach revealed Aug. 23 that she had been diagnosed with early onset dementia, Alzheimer's type. Warlick, Summitt's longtime assistant, has been promoted to replace her.

Summitt steps down after dementia diagnosis

Shelley Collier, who played for Summitt from 1983 to 1987, told CBS News, "When you think about women's basketball, how can you not think about Pat Summitt? She has touched a lot of people's lives."

During the press conference, Summitt called Warlick over and handed her a whistle.

"It is now time to turn over my whistle to you," said Summitt, who hugged Warlick and the crowed gave them a standing ovation.

"I know this works because I've heard it a lot of times," Warlick said, referring to the whistle.

Warlick isn't the only coach on the move. Tyler Summitt, Pat's son, will be an assistant women's coach at Marquette.

"This was her decision and I think that she took time after the season, thought about everything and the thing my mom's always taught me is to put the team before yourself," Tyler Summitt said. "She really felt like this was the best thing for the Lady Vol program. She's still going to be in a mentoring role."

Summitt tried to show people that it was possible to function even in the face of dementia and Alzheimer's. She had the blessing of Tennessee Chancellor Jimmy Cheek to keep coaching.

She delegated duties to Warlick, the associate head coach who directed the Lady Vols during games and addressed reporters postgame with other assistants taking on much more of the workload in an emotionally draining season that felt like a farewell tour it wound up being.

Yet Summitt's every move was studied to see how she felt, down to how many officials she yelled at or her icy glares at a player while overseeing a Division I program with a busy national travel schedule. After losing to eventual national champ Baylor in a regional final, Warlick's tears during the postgame news conference gave a glimpse of how exhausting the season had been and the possibility it was Summitt's last game.

"It has been a privilege to make an impact on the lives of 161 women who have worn orange," Summitt said. "I am so proud of them the Lady Vols student athletes and the honor to see them graduate and become successful young women."

Now Summitt can focus on her health and taking on duties that will keep her with the program she guided to eight national titles since taking over in 1974.

Summitt's new role will include helping with recruiting, watching practice, joining staff meetings, helping coaches analyze practice and games, and advising the Southeastern Conference on women's basketball issues and mentoring players. Summitt also will be working as a spokeswoman in the fight against Alzheimer's.

Summitt's final record stands at 1,098-208, 16 regular-season Southeastern Conference championships and 16 SEC tournament titles — the last won a month ago. During her time, Tennessee never failed to reach the NCAA tournament, never received a seed lower than No. 5 and reached 18 Final Fours. Those Final Fours tie the UCLA and North Carolina men for the most all-time by a college basketball program, and she never had a season with a losing record.

"Pat started coaching at a young age and no one will ever pass her on anything that she has done," Baylor coach Kim Mulkey said. "There may be coaches that have more national championships but there will never be anyone who has meant so much to women's basketball. Pat now moves to the next chapter of her life."

Every Lady Vol player who has completed her eligibility at Tennessee graduated under Summitt, and 74 former players, assistants, graduate assistants, team managers and directors of basketball operations are currently among the coaching ranks at every level of basketball.

CBSSports.com's Gary Parrish says Summitt is making her exit with dignity and class - and at the right time.

"She's not going to hang on too long like legends tend to do." Parrish writes. "She's walking away at the right moment and before anybody has a chance to whisper (or yell) that it's time, and now I hope she'll be able to spend the rest of her life cherishing and remembering all the people she's impacted and things she's accomplished for as long as humanly and medically possible."