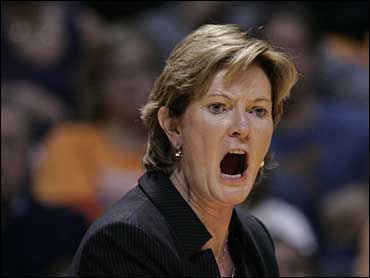 The iconic women's team coach the University of Tennessee has 1,071 career victories, eight national titles and an Olympic gold medal.

Now, she faces the battle of her life.

As CBS News' Jeff Glor reports, Summitt made a stunning announcement Tuesday. And it was done in the same direct, honest style she uses when she coaches. Summit said, "Earlier this year, the doctors at the Mayo Clinic diagnosed me with an early onset dementia, Alzheimer's-type, at age of 59."

Summitt took over as coach the job of Tennessee Lady Volunteers at the age of 22 in 1974.

She told the Washington Post she began having troubling memory lapses last year, saying, "Getting up, getting ready to go to the office and not sure what time I was supposed to be there. And I think it was, you know, for me -- I was trying to figure it out."

The news has now sent shockwaves through the Knoxville campus and rippled through the world of sports.

Her archrival on the court, Connecticut women's basketball coach Geno Auriemma, said in a statement that her announcement really puts things in perspective. He said, "I expect her to meet this challenge the same way she has the others in her Hall of Fame career: head-on."

Summit says not for a moment did she consider retiring, telling the Post, "I'm not gonna let this keep me from coaching, that's for sure.

That sort of certainty and fight is what her players have seen for four decades.

It's pretty clear not much has changed.

"There's no pity party, I'll make sure of that," she told the Post.

Summitt says she'd like to coach at least another three years.