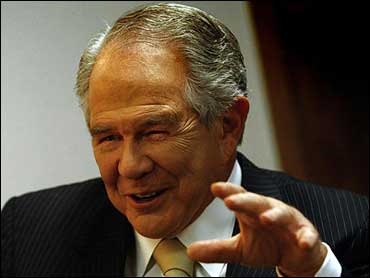 In what has become an annual tradition of prognostications, religious broadcaster Pat Robertson said Tuesday God has told him that a terrorist attack on the United States would result in "mass killing" late in 2007.

"I'm not necessarily saying it's going to be nuclear," he said during his news-and-talk television show "The 700 Club" on the Christian Broadcasting Network. "The Lord didn't say nuclear. But I do believe it will be something like that."

Robertson said God told him during a recent prayer retreat that major cities and possibly millions of people will be affected by the attack, which should take place sometime after September.

Robertson said God also told him that the U.S. only feigns friendship with Israel and that U.S. policies are pushing Israel toward "national suicide."

Robertson suggested in January 2006 that God punished then-Israeli Prime Minister Ariel Sharon with a stroke for ceding Israeli-controlled land to the Palestinians.

In 2005, Robertson predicted that Bush would have victory after victory in his second term. He said Social Security reform proposals would be approved and Bush would nominate conservative judges to federal courts.

Lawmakers confirmed Bush's 2005 nominations of John Roberts and Samuel Alito to the Supreme Court. But the president's Social Security initiative was stalled.

"I have a relatively good track record," he said. "Sometimes I miss."

In May, Robertson said God told him that storms and possibly a tsunami were to crash into America's coastline in 2006. Even though the U.S. was not hit with a tsunami, Robertson on Tuesday cited last spring's heavy rains and flooding in New England as partly fulfilling the prediction.