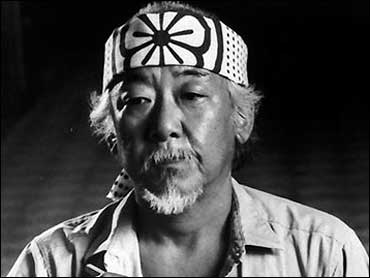 Actor Pat Morita, best known for helping teach a boy martial-arts mastery through household chores as the wise Mr. Miyagi in "The Karate Kid," has died. He was 73.

There were conflicting reports about the cause of death. His daughter Aly Morita said he died Thursday of heart failure at a Las Vegas hospital; longtime manager Arnold Soloway said the actor died of kidney failure at a hospital while awaiting a transplant.

His wife of 12 years, Evelyn, said in a statement that her husband, who first rose to fame with a role on "Happy Days," had "dedicated his entire life to acting and comedy."

His role in the 1984 film defined his career. As Kesuke Miyagi, the mentor to Ralph Macchio's "Daniel-san," he taught karate while trying to catch flies with chopsticks and offering such advice as "wax on, wax off" to help Daniel improve his karate hand movements while doing his chores.

A generation of young fans mimicked Morita's famous "crane kick" technique from the finale of the movie, which surprised many by grossing $91 million and establishing a popular franchise.

"It was both my honor and privilege to have worked with him and create a bit of cinema magic together," Macchio said in a statement. "My life is all the richer for having known him. I will miss his genuine friendship."

"Forever my Sensei," Macchio added, referring to Morita's role in "The Karate Kid."

The role earned Morita an Academy Award nomination for best supporting actor, but he lost to Haing S. Ngor, who appeared in "The Killing Fields."

Morita said in a 1986 interview with The Associated Press he was billed as Noriyuki (Pat) Morita in the film because producer Jerry Weintraub wanted him to sound more ethnic. He said he used the billing because it was "the only name my parents gave me."

For years, Morita played small and sometimes demeaning roles in such films as "Thoroughly Modern Millie" and TV series such as "The Odd Couple" and "Green Acres." His first breakthrough came with "Happy Days," and he followed with his own brief series, "Mr. T and Tina."

"The Karate Kid" led to three sequels, the last of which, 1994's "The Next Karate Kid," paired him with a young Hilary Swank.

Morita was prolific outside of the "Karate Kid" series as well, appearing in "Honeymoon in Vegas," "Spy Hard," "Even Cowgirls Get the Blues" and "The Center of the World." He also provided the voice for a character in the Disney movie "Mulan" in 1998.

Born in northern California on June 28, 1932, the son of migrant fruit pickers, Morita spent most of his early years in the hospital with spinal tuberculosis. He later recovered only to be sent to a Japanese-American internment camp in Arizona during World War II.

"One day I was an invalid," he recalled in a 1989 AP interview. "The next day I was public enemy No. 1 being escorted to an internment camp by an FBI agent wearing a piece."

After the war, Morita's family tried to repair their finances by operating a Sacramento restaurant. It was there that Morita first tried his comedy on patrons.

"Only in America could you get away with the kind of comedy I did," he said. "If I tried it in Japan before the war, it would have been considered blasphemy, and I would have ended in leg irons."

Morita was to be buried at Palm Green Valley Mortuary and Cemetery.

He is survived by his wife and three daughters from a previous marriage.