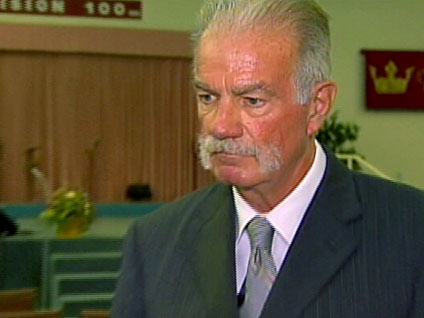 DEARBORN, Michigan - A Florida pastor's planned demonstration outside a mosque was scuttled Friday after a jury determined the protest would constitute a breach of the peace and he was ordered jailed for refusing to pay what authorities called a "peace bond."

The Rev. Terry Jones, whose past rhetoric against Muslims has inflamed anti-Western sentiment in Afghanistan, said he refused to pay the $1 bond because to do so would violate his freedom of speech. He later paid it and was released.

Jones had planned a demonstration Friday evening outside the Islamic Center of America in Dearborn, a suburb of Detroit that is home to one of the largest Muslim communities in the U.S.. An estimated 30,000 people in Dearborn, about a third of the city's population, trace their roots to the Middle East.

A burning of the Quran in March at Jones' church in Gainesville, Florida, led to a series of violent protests in Afghanistan that killed more than a dozen people. Wayne County Prosecutor Kym Worthy said fears that Jones could incite violent counter-protests led them to court.

Prosecutors worried the Michigan protest would lead to violence and asked Dearborn District Judge Mark Somers to intervene. Somers conducted a one-day jury trial to determine whether Jones would pose a threat to peace. They did, and Somers then ordered Jones and an associate to post the bond to ostensibly cover the costs of police protection.

While largely symbolic, the bond also came with conditions that included a prohibition on Jones from going to the mosque or the adjacent property for three years.

Somers said he spoke to the jury after they reached their verdict and they told him they were concerned with the "time, place and manner and not the content of the speech."

But Robert Sedler, a constitutional law professor at Wayne State University, called the entire proceedings unconstitutional. He said the U.S. Supreme Court has found that it's the job of the police to protect speakers at such events and said it is unconstitutional to require protesters to post a bond for police protection.

But Dawud Walid, the executive director of the Michigan chapter of the Council on American-Islamic Relations, said Jones and Sapp should have been allowed to demonstrate outside the mosque to show that Muslims in Dearborn would not have rioted in response.

"Mr. Jones has been made as a martyr for free speech," Walid said.

Dearborn had denied Jones a permit to protest outside the mosque and offered alternative sites, but Jones wouldn't move the location. He refused to pay the bond to make a point about freedom of speech, said David Grisham, a pastor from Amarillo, Texas, who came to Detroit to take part in the demonstration with Jones.

Jones acted as his own attorney and told the jury in his closing argument that the mosque, one of the largest in the U.S., was chosen because his protest is against "a radical element of Islam."