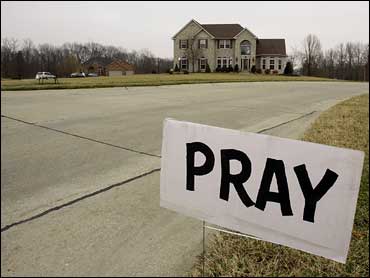 The man charged with gunning down a pastor mid-sermon and then stabbing two churchgoers at an Illinois church had marked the day as "death day" in a planner found in his home, a prosecutor said Monday.

Madison County State's Attorney William Mudge said he had no details on the reference in alleged gunman Terry J. Sedlacek's day planner, only that it singled out Sunday as "death day."

"The only thing I can really comment on is he came armed with many rounds of ammunition and a knife, and I think we can surmise that more bloodshed may have occurred," Mudge said.

Sedlacek, 27, was charged Monday with first-degree murder and aggravated battery in the attack at First Baptist Church that killed the Rev. Fred Winters and left Sedlacek and two congregants who tackled him with stab wounds.

Neither Mudge nor Illinois State Police would comment on a possible motive or on Sedlacek's mental state when he allegedly strode into the church shortly after 8 a.m. Sunday, exchanged words with Winters and began firing a handgun.

Sedlacek has suffered bouts of erratic behavior his family has attributed to Lyme disease. But Dr. Eugene Shapiro, a Lyme disease expert at Yale University, said it would be unlikely that tickborne ailment would make someone so violent.

Mudge said Sedlacek had 10 rounds of ammunition in a handgun and was carrying two more 10-round magazines in his pocket on Sunday. The .45-caliber Glock jammed after four shots were fired at Winters, prosecutors said, but not before one bullet fatally struck him in the heart after he deflected the first with his Bible.

Sedlacek was ordered held without bond even as he remained hospitalized Monday in serious condition. Authorities said he stabbed himself in the throat while being wrestled to the ground by the two congregants.

One of them, 39-year-old Terry Bullard, also remained in serious condition Monday. The other, Keith Melton, was treated and released.

But neither Mudge nor state police could say Monday whether Sedlacek knew Winters, a married father of two who had led the church for nearly 22 years.