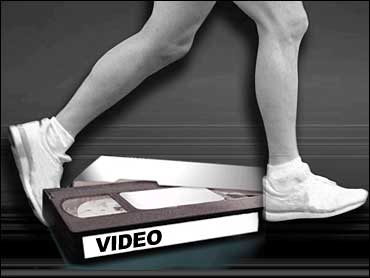 With the wide variety of exercise options available today, it's easy to forget about Richard Simmons and Jane Fonda, some of the early pioneers of home exercise videos.

But despite the legwarmers and spandex outfits of the '80s, their videos are still popular with people looking to shed a few pounds.

Petra Kolber, a contributing editor for Health magazine, stopped by The Saturday Early Show to help explain why the videos are popular.

Richard Simmons
Richard Simmons has built a reputation of caring for the people he's trying to help lose weight. Kolber says, unlike many aerobics instructors who are trying to make the most money they can, Simmon is concerned with building a successful program that will help people shed the pounds.

The workout has a fairly low intensity level, so the viewers have an easier time keeping up. And, Kolber says, the music Simmons uses are timeless classics.

Also, Simmons show the results of the participants, which, Kolber says, can serve as a motivator for those viewing at home.

Jane Fonda
Kolber says Jane Fonda does a great job explaining the moves demonstrate in her workout videotapes. Fonda admits she didn't know much about aerobics when she first started and she was criticized for demonstrating exercises that were potentially dangerous, according to Kolber. But, Kolber says Fonda educated herself in aerobics and learned the right way to exercise.

Jazzercise
Jazzercise is an exercise program that is pre-choreographed, so every Jazzercise instructor in the country teaches the same program. Wherever you go, whether to a class locally or if you're traveling on the road, the routine will stay the same. Jazzercise has been in existence for 35 years. Kolber says Jazzercise changes the program around every couple of months to incorporate some of the latest trends in exercise and fitness such as yoga, pilates and kickboxing.

So, Kolber says Jazzercise has done a nice job over the years of keeping its program consistent but interesting with the small changes.