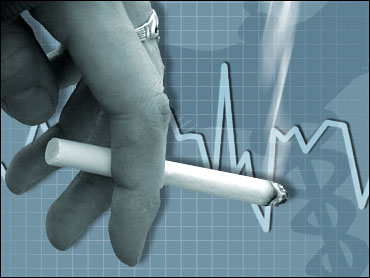 If your spouse still smokes, here's a new reason to urge him or her to quit.

A new study suggests that people who live with a smoker for more than 30 years are about 30 percent more likely to develop dementia than those who have never lived with a smoker.

The situation is even worse for people who are already at increased risk for dementia due to clogged arteries leading to the brain, says researcher Tad Haight, MA, senior statistician at the University of California at Berkeley.

For such people, living with a smoker for more than 30 years appears to raise dementia risk more than twofold compared with people who never lived with a smoker and don't have blocked brain arteries, he tells WebMD.

The study, presented at the American Academy of Neurology's annual meeting, included 985 people aged 65 and older who had never smoked.

None had dementia or had suffered a heart attack or stroke or had blocked leg arteries at the start of the study.

Over the next seven years, 10 percent of the 985 people suffered a heart attack or stroke or developed blockages or clots in their leg arteries. Fifteen percent were diagnosed with dementia.

Ronald C. Petersen, MD, director of the Alzheimer's Disease Center at the Mayo Clinic in Rochester, Minn., says that while the study showed a link between passive smoke and dementia, it doesn't prove that it actually caused the memory disorder.

Petersen tells WebMD that people who have lived with a smoker shouldn't rush to their doctor to get tested for dementia.

"From a practical point of view, the thing to do is remove yourself from the situation and follow a healthy lifestyle — things we recommend in any case," Petersen says.

But there's no reason, still, not to use it as ammunition to convince your spouse to kick the habit.