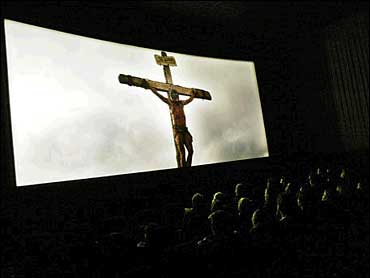 Mel Gibson's film-distribution outfit is suing Regal Entertainment Group for $40 million or more, claiming the movie chain shortchanged the company on revenues from "The Passion of the Christ."

Regal, the nation's largest movie chain, agreed to pay Gibson's Icon Distribution 55 percent of receipts but reneged in May and offered only 34 percent, George Hedges, an attorney for Icon, said Tuesday.

An executive at Regal Entertainment - formed in 2001 by Colorado billionaire Philip Anschutz from debt-loaded chains Regal Cinemas, United Artists Theater and Edwards Theatres - would not discuss the lawsuit.

"We do not comment on our business practices with the studios," said Regal spokesman Dick Westerling.

"The Passion of the Christ" is No. 7 on the all-time domestic box-office charts after taking in $369.9 million.