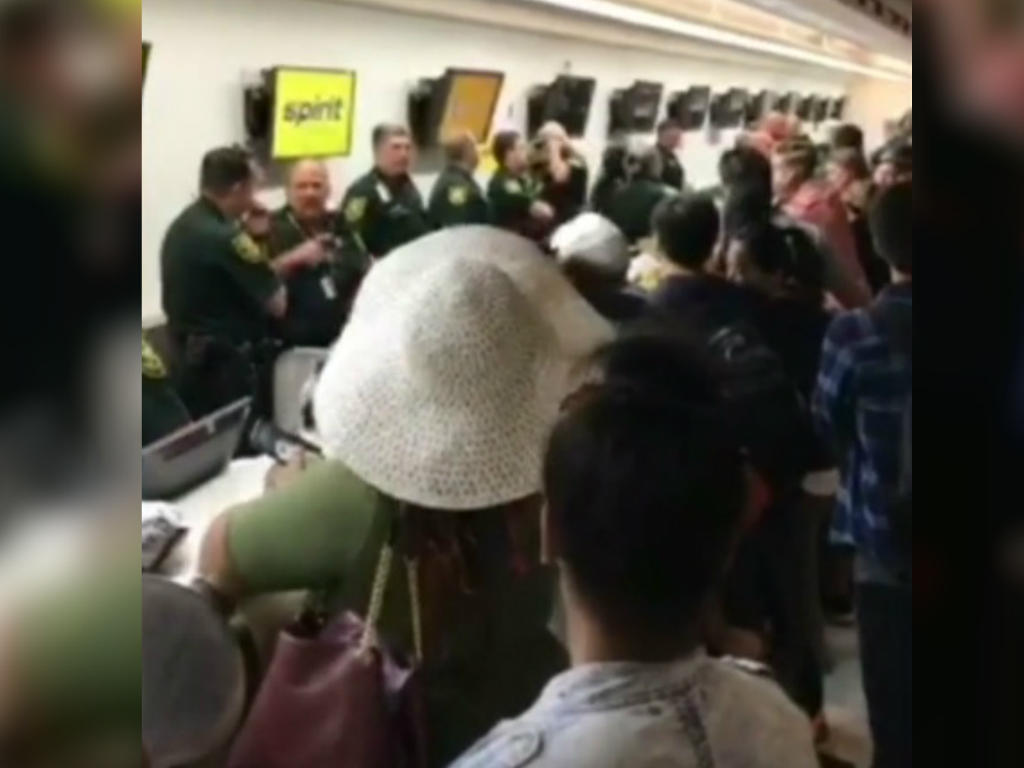 FORT LAUDERDALE, Fla. -- There was quite the commotion at Fort Lauderdale-Hollywood International Airport (FLL) Monday after hundreds of passengers were stranded, reports CBS Miami.

It turns out a legal showdown between Spirit Airlines and the pilots association is playing out not just in the courtroom but at FLL.

A total of nine flights were canceled.

Twitter user Jose Rodriguez has posted a video that allegedly shows the scene at the Spirit Airlines counter after the flights were canceled.

The Broward Sheriff's Office was on hand to keep the peace as one deputy explained what travelers could do to make the process easier.

CBS West Palm Beach affiliate WPEC-TV cites a Broward County Sheriff's deputy as saying three people were arrested and another one was detained.

Essentially, this is about labor negotiations. Spirit is claiming the pilots are refusing to fly to influence the outcome.

Caught in the middle: the passengers.

CBS Miami reports the airline is working to accommodate them.

Spirit Airlines's spokesman Paul Berry issued the following statement to CBS News: "We are shocked and saddened to see the videos of what took place at Ft. Lauderdale/Hollywood International Airport this evening. This is a result of unlawful labor activity by some Spirit pilots designed to disrupt Spirit operations for our customers, by canceling multiple flights across our network. These pilots have put their quest for a new contract ahead of getting customers to their destinations and the safety of their fellow Spirit Team Members. It is for this reason, Spirit has filed suit in Federal Court to protect our customers' future travel."

The pilots association issued a statement of its own to CBS News: "The Air Line Pilots Association, Int'l and the Spirit pilot group it represents are not engaged in a job action. Rather, ALPA and the Spirit pilots are continuing to do everything possible to help restore the company's operations, which have experienced significant problems over the past several days.  While we will continue these efforts, we will actively defend the association, its officers and its member pilots against the unwarranted and counterproductive legal action brought this evening by Spirit Airlines."

Here's another view of the crowd at FLL posted to Twitter by Jose Rodriguez: