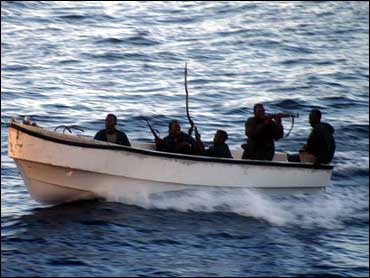 A cruise liner that was attacked by pirates over the weekend docked safely on the Indian Ocean archipelago of Seychelles on Monday after changing its course to escape.

"I was scared. I was very scared," said Jean Noll of Florida. But her husband said the experience was not likely to deter them from enjoying another cruise. "We cruise all the time," Clyde Noll said.

The Seabourn Spirit had been bound for Mombasa, Kenya, when it was attacked by pirates armed with grenade launchers and machine guns on Saturday about 100 miles off Somalia's lawless coast. The ship escaped by shifting to high speed and changing course.

The gunmen never got close enough to board the cruise ship, but one member of the 161-person crew was injured by shrapnel, according to the Miami-based Seabourn Cruise Line, a subsidiary of Carnival Corp.

After docking at the Seychelles, passengers boarded two buses for a tour of two of the resort islands, and reporters were kept away. Most passengers were to continue from the Seychelles to Singapore, company officials said, although some who planned to tour Mombasa were to fly there Tuesday aboard a chartered plane.

Relieved vacationers praised the ship's captain for foiling the attack that lasted for more than 90 minutes, during which pirates fired their weapons on the bridge and elsewhere in an effort to cripple the vessel.

Some passengers were lucky to escape with their lives, said Charles Forsdick, from Durban, South Africa.

A woman survived an explosion in her stateroom because she was taking a bath at the time. Others flung themselves to the floor to avoid bullets that were zipping through the ship, Forsdick told Associated Press Television News.

Retired physician and World War II veteran Charles Supple, of Fiddletown, Calif., recalled by phone on The Early Show Monday that, "I grabbed my binoculars, thinking I was seeing things" out his stateroom window. "All this time, you're hearing the bullets hit the ship and wondering what in the world is going on."

Bob Meagher of Sydney, Australia, said he climbed out of bed and went to the door of his cabin shortly before 6 a.m. after hearing a commotion outside.

"I saw a white-hulled boat with men in it waving various things and shooting at the ship — at that stage it appeared to be rifle fire," he told Australian radio. "My wife said 'Look, they're loading a bazooka,' which we later discovered was called an RPG (rocket-propelled grenade) launcher.

"There was a flash of flame and then a huge boom — a terrible boom sound," he said, adding the grenade hit about 10 feet from where they were.

The liner was at the end of a 16-day voyage from Alexandria, Egypt.

Australian Foreign Minister Alexander Downer said Monday that the attackers might have been terrorists. But others said the attack bore the hallmarks of pirates who have become increasingly active off Somalia, which has no navy and has not had an effective central government since 1991.

Judging by the location of the attack, the pirates likely were from the same group that hijacked a U.N.-chartered aid ship in June and held its crew and food cargo hostage for 100 days, said Andrew Mwangura, head of the Kenyan chapter of the Seafarers Assistance Program.

That gang is one of three well-organized pirate groups on the 1,880-mile coast of Somalia, which has had no effective government since opposition leaders ousted a dictatorship in 1991 and then turned on each other, leaving the nation of 7 million a patchwork of warlord fiefdoms.

U.S. and NATO warships patrol the region to protect vessels in deeper waters farther out, but they are not permitted in Somali territorial waters.

The International Maritime Bureau has for several months warned ships to stay at least 150 miles away from Somalia's coast, citing 25 pirate attacks in those waters since March 15 — compared with just two for all of 2004.

The 440-foot-long, 10,000-ton cruise ship, which is registered in the Bahamas, sustained minor damage, the cruise company said. The liner, which had its maiden voyage in 1989, can carry 208 guests.

How to Stop a Runaway Vehicle