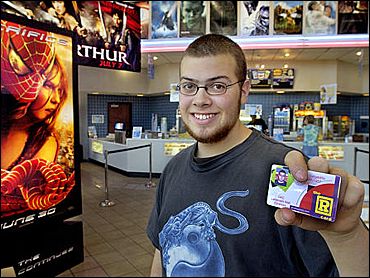 The Illinois teen-ager's way around the rating system's age limit was a parent-approved pass card that has started a debate over convenience versus parental responsibility and raised fears that the government might jump in to settle the dispute.

Supporters say parents can sign off on movies for their kids without the time and expense of chaperoning them with the new R-card, which Springfield-based GKC Theatres began rolling out last fall in parts of its 22-city chain in Illinois and three other Midwest states. The card only works for the R-rating, which requires children under 17 to be accompanied by a parent or adult guardian.

"I like it because now we don't have to wait until they come out on video," said Norris, a high school junior whose parents had to accompany her and sign for the $2 photo ID.

Critics argue that the cards amount to parents handing the delicate decision about what movies are appropriate to their kids, a shift they say violates the intent of the motion picture industry's voluntary rating system.

"All R-rated films are not alike. It is the parents' responsibility to make specific judgments about R films — and wrong to give a blanket endorsement to all," said Jack Valenti, president and CEO of the Motion Picture Association of America, which issues movie ratings.

GKC, the nation's 15th largest theater chain, is the only theater network in the nation offering the card, said John Fithian, president of the National Association of Theater Owners.

Some opponents fear that leaving movie choices to kids could taint the ratings system, voluntarily enforced by theaters since 1968. They say that could open the door to government regulation that would stifle creativity and experimentation in film making.

"If parents lose faith in the system, the first thing they'll ask is 'What are our recourses?' Then, we could start hearing from every politician that wants to make a name for himself in the name of family values," said Dann Gire, president of the Chicago Film Critics Association.

GKC has issued about 700 R-cards — mostly in central Illinois — and plans to offer them throughout the chain by the end of the year, said James Whitman, the company's director of operations and marketing.

Whitman said he came up with the idea after parents complained that they wanted to let their kids see R-rated movies but didn't want to sit through the films themselves. He said GKC encourages parents to give the cards to kids only after approving a movie.

"From what I can tell, the people who have them like them and the parents are trying to use them responsibly. We're not being inundated with kids whose parents are giving them access to everything that comes on the screen," Whitman said.

The motion picture and theater owners associations are pressing GKC to abandon the program, but some parents think the cards are a good idea.

Joyce Needham, of Peoria, said she discusses every movie "before and after" her 16-year-old grandson uses his R-card. With or without a card, she said, kids will find a way to get what they want.

"I just think communication is the answer and trusting the child," Needham said. "If you can discuss what's going on in this world, you're better off than letting them find a way to do it on their own."