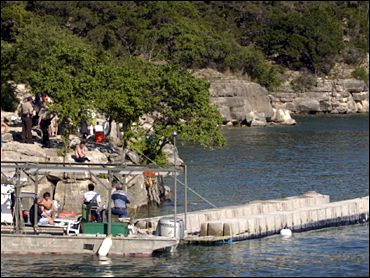 Revelers who crowded to one side of a barge to check out some nude sunbathers during "Splash Day" wound up splashing in the water when the craft tipped over.

About 60 people were rescued Sunday from Lake Travis, including two with minor injuries, authorities said.

The accident happened during Splash Day, a semiannual event hosted at the clothing-optional area by the Austin Tavern Guild, a gay and lesbian bar association.

Witnesses said that all of the people aboard the barge moved to one side after it was tied up at Hippie Hollow, the only public nude beach in Texas, creating uneven distribution and making it tilt.

"As the captain was running upstairs to tell them to move away from the railing, it capsized," dumping its passengers into about 39 feet of water, Travis County sheriff's spokesman Roger Wade said.

Krista Umscheid, a spokeswoman for the Lower Colorado River Authority, said everyone aboard was safe.