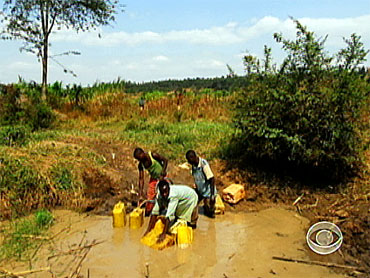 The photos are just one way 33-year-old Scott Harrison is trying to get you to start paying attention - to water.

What's the reaction when people see the photos?

"There's better things to do with money than what most people do with it," he says.

But his intentions were not always so "pure."

"I moved here at 18 and I started throwing parties, selling expensive drinks to people, $350 bottle of vodka to bankers," Harrison says.

Until age 28, he was a nightclub promoter in New York City.

"I was on a vacation in Uruguay and I just realized, man, you know, I've arrived and I'm miserable, I'm soul-less," Harrison says.

So he quit the night life and volunteered with a charity. In Africa he saw how simple medicine could save lives - and how dirty water could destroy them.

"We'd see people drinking out of swamps, green, muddy, algae-covered swamps. And we'd say to each other - well no wonder everyone is sick," Harrison says.

That's when he decided to use his talent for promotion as a force for good.

"We think charity should be cool," he says.

He used graphics that catch your eye and steal your heart - or an ad that imagines New Yorkers collecting drinking water from Central Park.

A well goes for about $5,000 and donors can see exactly where their money went.