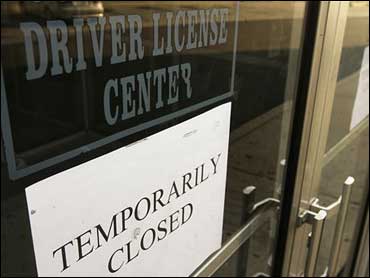 The state museums didn't open Monday. State parks were closed to visitors at the height of the summer tourism season, and many state services were idle because of a government shutdown that kept about 24,000 workers off the job.

Gov. Ed Rendell shut down the Pennsylvania government late Sunday over a budget stalemate with the Legislature that partly hinges on his energy plan for the state.

"I sincerely hope that this will be a one-day furlough, and I have reason for optimism," Rendell said at a news conference Sunday night, though he declined to be more specific.

Monday morning, the shutdown set in as the partisan battle of wills between the Democratic governor and Republicans who control the Senate entered the ninth day of the new fiscal year. Lacking an approved state budget, the state has lost the authority to spend money on nonessential services.

"Gov. Rendell, whatcha doing? You should have had it done, months ago. You all want to wait to the last minute to do things, and that's not right. It hurts the public," "Anthony" in downtown Philadelphia told CBS radio station KYW-AM.

With Rendell's order, state workers deemed not critical to health or safety were furloughed without pay.

Highway maintenance and a range of permitting and licensing functions were stopped or severely curtailed. Even the lights that normally illuminate the Capitol dome are off, and state tourist attractions aren't open. Only critical services such as health care for the poor, state police and prisons remain in operation.

At a PennDOT licensing center in downtown Philadelphia, "Stephanie" told Abrams she was stunned to find the office closed.

"It's very annoying. It's such an inconvenience," she said.

Outside another driver's licensing station, University of Pittsburgh student Dandan Hong, 21, found out from security guards that she would have to wait to get her permit — the office was closed. She had been cramming for the test and leaves on vacation in two days.

KYW's Mike Dunn reports that despite the partial state shutdown, the five casinos in Pennsylvania were open for business on Monday thanks to a judge's ruling late Sunday night.

The slots parlors were to have closed, because state workers operate the central computer system that monitors gaming. But the judge said those workers should not, for now, be furloughed.

That could change: the judge has scheduled another hearing on the matter for Tuesday. The hearing would be cancelled, of course, if a budget agreement is reached.

Bobby Soper, chief executive of Mohegan Sun at Pocono Downs, worried that his patrons — there are usually about 5,000 on a typical Monday — might not know the casinos were open.

"The fact that it occurred at the 11th hour made it somewhat difficult to get the message out," Soper said.

Rendell, whose last-ditch negotiations with lawmakers fell short of a budget deal that could have averted the furloughs and partial shutdown, said he hoped the budget impasse would be brief.

Republicans lashed out at Rendell, saying they doubted the furloughs were a legal necessity and repeated complaints he had included other priorities in the budget talks.

Among the key sticking points in agreeing to a new $27 billion-plus budget are raising the state's debt ceiling and an energy plan that Rendell has insisted the Legislature approve before he signs, they said.

"We have a $650 million surplus in Pennsylvania," said Senate Majority Leader Dominic Pileggi, a Republican. "There's absolutely no reason why we can't have a budget agreement. We could have had a budget earlier but for these ancillary issues."

The centerpiece of Rendell's energy plan would place a surcharge on electricity use for a fund for alternative energy programs and electricity conservation. Republican legislators and some Democrats oppose the surcharge and accused the governor of holding state employees hostage to force them to approve it.

"I can't believe that a man who would call himself governor would do this to state employees," said Senate President Pro Tempore Joe Scarnati, a Republican.

One labor leader, David Fillman, the executive director of Council 13 of the American Federation of State, County and Municipal Employees, said his union members, 14,000 of whom face furlough, should not have been caught in the middle of a political dispute.

"A lot of them live paycheck to paycheck, and even if it's a day's pay that they lose, it has an effect on their personal budgets," Fillman said.

Lawyers for state-employee unions argued in court Monday that the furloughs should be halted, saying Rendell had no rational basis for classifying employees as critical or noncritical.

"When (the furloughed employees) return to work they will never be compensated for the time they spent on the street," said Alaine Williams, an attorney for Council 13.

At Black Moshannon State Park, JoDee Dyerson and her family, from State College, were told they had to be out of their cabin by 10 a.m. Monday because of the shutdown.

"They made it the worst summer ever," said her son McClane, 7.

Gamblers trying their luck at Philadelphia Park Racetrack and Casino in Bensalem, just outside Philadelphia, called the showdown nothing more than politics. "It's all grandstanding, and it's ridiculous," said Maryann Breen, playing a Wheel of Fortune machine.