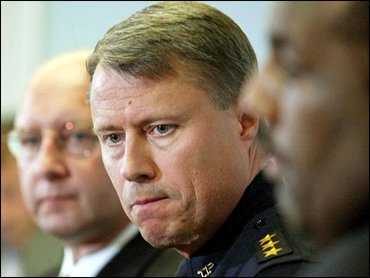 The citizens of Tacoma were soon about to find out a lot that they didn't know about David Brame.

Back in 1981, when he applied for the police force, Brame failed one psychological report and barely passed the second. But somehow, that didn't stop him from becoming a cop.

So how did a man as unstable as David Brame become chief of police? The woman who knew Brame's darkest secret was about to tell her story.

Back in 1988, a woman reported that she had been raped by a police officer, David Brame.

"It's been a cover-up, a big cover-up for a long time. A lot of people are probably real concerned about what's gonna come out," says the woman, now 45, and telling her story on television for the first time. She asked 48 Hours not to show her face.

This woman, who was then a juvenile counselor, worked with Brame: "He asked me one day if I wanted to go get a bite to eat or something, and he asked me for my phone number and I gave it to him … He seemed like a nice guy."

They went out that night, but she says they didn't have much to talk about. She drove him to his home just outside Tacoma and he asked her to come inside.

"Then he came in and he sat down on the couch and that's when he attacked me," she says. "He just reached over and then grabbed me and tried to kiss me. I said, 'No Dave. I don't wanna do this. I need to leave.' I tried to push him away and he grabbed me."

She says Brame picked her up and carried her to his room: "Then he threw me down on the bed and he grabbed me by the back of the hair and had me look at a gun that was laying on the nightstand. And then he said I needed to do what he wanted me to do. And I kept telling him just to please let me go."

She tried to fight him off, but he was too strong. After he raped her, she says he started crying and said he was sorry. She grabbed her clothes and left, but what she didn't do was call the police: "Because he was the police and I was afraid. I didn't know if they would listen to me."

But her tension was obvious, whenever she was around Brame at work, and another officer noticed. "She said that she had been raped," says Officer Reggie Roberts, Brame's childhood friend. "And she had told me his name. And I was extremely shocked."

Roberts set up a meeting at his home and invited Brame and his accuser. "She was crying. I could see all of the emotions just pouring out," says Roberts. "It was a very intense time in that room."

"I just looked at him and just said he raped me. And he said, 'I know, I'm sorry.' And he started talking about being a good Christian and that he was going to his church and he was going to get counseling and he didn't want us to tell anybody," says the woman.

Roberts was convinced that Brame had committed the crime: "I told him this is a felony crime. Either you go to internal affairs or I will."

Roberts did go to internal affairs and investigators interviewed Brame, who denied raping the woman. But his admission to Roberts was deemed worthless since he hadn't been read his rights. Once again, it seems, he had slipped through the cracks.

When Brame's accuser found out that he had shot his wife and himself, she said it should never have happened: "I was wishing that I could have told somebody something that would have made them listen to me, so she would have been safe."

"We haven't seen the end of this. I don't think the citizens of the city of Tacoma are gonna let this die," says Hathaway.

After the suicide of its police chief, Tacoma was a city in turmoil.

Crystal Brame was still in critical condition and fighting for her life. Now, the city officials had some explaining to do, and no one was more outspoken than Ray Corpuz, Tacoma's city manager: "It's not easy when somebody that you believed in did what he did and betrayed his fellow officers."

In Tacoma, it's not the mayor who is the most powerful government official, it's the city manager. And it was Corpuz who promoted David Brame to the top job.

Suddenly, Corpuz, who was used to running the city his own way for 13 years, was facing a barrage of uncomfortable questions – especially when it was revealed that he knew about the rape allegation against Brame. He had been told almost two years ago by one of the city's attorneys.

But Hathaway claims that Corpuz knew all about the rape accusation against Brame and that Brame, in turn, knew certain things about Corpuz.

Their insurance company, Safeco, paid off the claim, but suspected fraud and went to the police department. According to William Garrison, chief criminal investigator for the Pierce County prosecutor's office, they found things that they felt constituted an ironclad case of insurance fraud: "The agents from Safeco were angry."

The case was referred to Brame, then chief of detectives. But instead of assigning the case, he told his boss, who then tipped off Corpuz. The investigation went nowhere.

Garrison, however, pursued the case and in the end, Lynda Corpuz accepted responsibility and paid $30,000 in restitution.

In 2001, when it came time to pick a new police chief, Corpuz picked the ultimate insider, David Brame.

When Crystal began divorce proceedings against Brame, he began using his power against her.

Once, during a divorce hearing, he brought three of his officers with him. One of the officers was Catherine Woodard, Brame's assistant chief.

One night, after Crystal had moved out, Woodard came with Brame to Crystal's house to pick up the children. Crystal's mother, Patty, says Brame brought his deputy with him purely for intimidation: "I stood there the whole time because she was repeatedly asked to leave and she didn't."

Crystal was so shaken by Woodard's manner that she made a 911 phone call to put the threatening visit on record. After Brame killed himself, Woodard was named acting chief, but not for long. Crystal's 911 call was made public, and Corpuz suspended Woodard, pending an investigation.

But despite everything, Corpuz was still clinging to his job.

One week after the shooting, on May 2, Crystal died. And Haley and David, who saw their father shoot their mother, were now orphans.

Mornings at home have changed for Crystal's parents, Patty and Lane. Both in their 60s, they're parents once again, trying to keep up with their grandchildren, Haley and David.

The children may have lost their parents, but a loving family surrounds them. Crystal's sister, Julie and her husband, David, have become their legal guardians. At the cemetery where Crystal is buried, the name Brame is not on the headstone.

"I want to know from Ray Corpuz, who is responsible, what is the truth, what did happen and why did it happen," says Luvera. "I believe he is part of the jigsaw puzzle."

But Corpuz isn't talking. He refused 48 Hours' request for an interview.

Corpuz seemed untouchable. But with the David Brame scandal overwhelming Tacoma, Corpuz was fired two months after the shooting.

John Hathaway, the man who knew too much, now knows things will never be the same: "Tacoma's got a long way to go."

A state report on the Brame case would finally conclude that David Brame's hiring and promotion to police chief were proper. But it criticized how the Tacoma police department handled the rape allegation against him.

As for Crystal Brame's accusations against her husband, the department adopted strict new procedures for handling domestic abuse allegations against police officers.

In all, there have been three separate investigations into the Brame murder-suicide. But no criminal charges have been filed against anyone.

Did an out-of-control home renovation lead to murder?

The Station nightclub fire: What happened and who's to blame?
Thanks for reading CBS NEWS.
Create your free account or log in
for more features.
View CBS News In
CBS News App Open
Chrome Safari Continue
Be the first to know
Get browser notifications for breaking news, live events, and exclusive reporting.