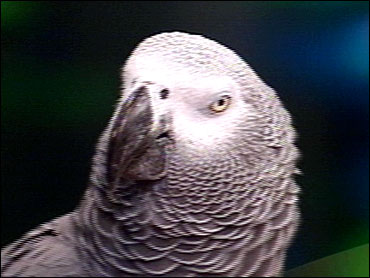 SAND LAKE, Mich. -- A Michigan prosecutor says he'll review a family's claims that a pet parrot may have mimicked a murder victim's last words, but says they could be a flight of fancy.

45-year-old Martin Duram was fatally shot in his home in Sand Lake, about 30 miles north of Grand Rapids, in May of 2015. His wife was also shot but survived, and is now a possible suspect, reports WABC.

Duram's mother Lillian Duram tells the station Bud the bird, the couple's pet, was recorded on video several weeks after the shooting mimicking what appeared to be an argument before saying the words, "Don't [expletive] shoot."

The family believes the grey parrot may be a feathered witness who heard their son's last words before he was shot dead.

Newaygo County Prosecutor Robert Springstead told 48 Hours" Crimesider he's read about the family's claims online, but he hasn't seen the video and can't be sure whether the parrot is mimicking the victim, someone else, or something he heard on TV -- or just squawking about nonsense.

Springstead is reviewing the case and says he expects to make a charging decision in the coming weeks. He couldn't comment as to whether the victim's wife is considered a suspect. He said he'd do his due diligence to find out whether the parrot's words are of use, but he says it's a "long shot."

"I can't imagine a scenario where a parrot is qualified as a witness in a court of law," Springstead said.

If he finds a "good faith basis to make an argument" to include the parrot's words should the case go to trial, he said he would ask a judge to rule. However, he said, hearsay evidence is generally inadmissible in court, "and that comes from people, not animals."

"It's certainly interesting, but there's other information that's certainly more reliable in the police report and investigation," Springstead said.

The station reports Michigan State Police believe Martin Durham was the victim of an attempted murder-suicide, and say his wife shot him before turning the gun on herself. The woman reportedly denies killing her husband.