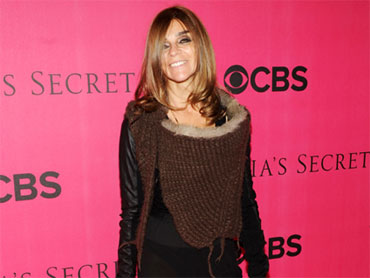 Paris Vogue says its editor-in-chief, Carine Roitfeld, has decided to leave after a 10-year tenure in which the French fashion monthly became "a worldwide reference and indispensable magazine."

The magazine says on its Web site that Roitfeld's years as the top editor were marked by "constant growth" both in terms of circulation and advertising.

Xavier Romatet, the head of Conde Nast France, the French arm of the U.S. publishing house, said he "of course" regrets Roitfeld's decision to leave "even if I understand it." He didn't elaborate.

Paris Vogue said in the online statement Friday that Roitfeld's departure would be effective "in several weeks." It didn't indicate what her future plans are.

But the Web edition of British Vogue said that she had "decided to concentrate on personal projects."

Under Roitfeld, French Vogue has lived up to its reputation for pushing the envelope and has continued to be much edgier than its more commercial U.S. counterpart, with lots of nudes and sometimes overtly sex-seeped or disturbing spreads.

Roitfeld made waves with a recent shoot that featured supermodel Lara Stone in blackface, for example.

Roitfeld, a whip-thin woman with a penchant for vertiginous heels and body-conscious trench coats, has a reputation among industry for being friendly and approachable — in contrast with American Vogue's Anna Wintour, who is widely regarded as an ice queen. The two women have long been rumored to be rivals but are often seen chatting amicably at fashion shows.