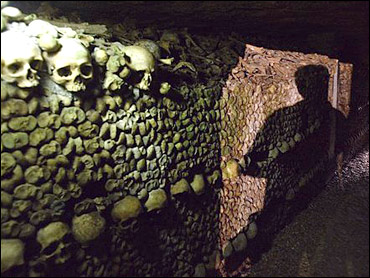 The City of Light harbors a city of darkness, a vast network of subterranean tunnels that once gave refuge to bandits, smugglers and saints, and cradles the bones of some 6 million Parisians.

Today, this eerie maze is the haunt of living spirits, from youths looking for adventure to urban explorers carving out a new frontier.

An underground movie house replete with bar and phone service, recently discovered by police, is but a slice of the thriving underworld below Paris.

Some 185 miles of tunnels and underground passageways honeycomb the underbelly of the city, most old quarries for the Lutecian limestone used to build the French capital. Others house electricity and telephone cables.

In the deepest sphere, some 100 feet under, lie the catacombs, holding ancient bones from overstocked cemeteries. Part of the catacombs are open to the public, but dropping into the rest city of darkness is illegal and can be hazardous.

This is not a journey for the faint of heart. One way is a middle-of-the-night descent through a manhole and down a ladder. Once inside, a sand-colored maze of galleries, nooks and crannies unfolds. Ominous holes seem to descend to the center of the Earth.

It's an all-weather trip that includes strolling, sloshing through mud and slithering through narrow tunnels.

"Paris is a Mecca" for underground exploration, said Lazar Kunstmann, a spokesman for the group that set up a cinema across the Seine River from the Eiffel Tower. The group has seven other subterranean sites, he said, refusing to give details.

In the eternal night of underground Paris, secrecy is sacrosanct, creating a subculture with its own code and names.

Slipping into the underground, social classes melt away, and "there's a sense of having a double life," said Patrick Aalk, a photographer with more than two decades of experience as an urban explorer.

Like Lewis Carroll's Alice discovered when she fell through a rabbit hole, fear, intrigue and wonder await the subterranean traveler. Instead of a tea party with the Mad Hatter, there are parties by flashlight in dank, musty quarry rooms bearing names like "Byzance," "the Cellar" or "Room Z."

But this strange universe is being increasingly scarred by "cataphiles" who daub graffiti on walls or leave beer cans behind. Some quarry rooms are covered in paint, irking another breed of subterranean spirits who call themselves urban explorers.

The police chief in charge of subterranean Paris fears the new generation of fun-seekers is on a collision course with the urban explorers who regard the underground as part of Paris' patrimony.

"It's a milieu that is becoming more and more mixed ... with some people who can be in opposition to others," Commander Luc Rougerie told The Associated Press.

Cataphiles have haunted the Paris underworld for decades, but the Aug. 23 discovery by police of the cinema, set up by an urban explorers' group calling itself The Perforating Mexican, revealed just how sophisticated life below ground has become.

The cinema seated about 30 people on benches carved from rock — and covered with wood for comfort, according to Kunstmann. The complex included a bar, a restaurant and some annex rooms for privacy.

A toilet drew water from the Trocadero gardens above, where "there was a permanent leak," said Kunstmann. Electricity was siphoned off by wrapping wires around the state power company's cables, he said. "The problem is not to leave a trace on the electricity counter."

According to Kunstmann, the cinema, finished some 18 months ago, was a renovation of a crude theater built three years ago.

"There was a certain surprise" when police found the movie house, Commander Rougerie conceded.

A less sensational but more worrisome discovery was made across town, under the high-security La Sante prison. There, several tunnels, once shut, were partially reopened. Fears that prisoners were plotting an escape or, worse, that terrorists had invaded the underground set off alarms.

In the end, "we think it's amateurs of the underground looking for an old passage," said Catherine Briguet, judicial police spokeswoman. There have been no arrests, she said.

Rougerie warns of dangers, from thin air that can cause queasiness to cave-ins. He cited cases of people falling into 30-foot-deep wells or getting lost. There are no known deaths.

The catacombs have inspired writers from Victor Hugo to Gaston Leroux, whose "Phantom of the Opera" hid in "that infernal underground maze."

"When you go down, you enter the city's past. It's a voyage into the bowels of the city," said Aalk, the photographer.

Through the ages, the catacombs have harbored an eclectic lot. In the 13th century, bandits hid under the Chateau de Vauvert, now the Luxembourg Gardens, and sorcerers used the quarries for black masses during the 1348 plague.

St. Denis, patron saint of France, said Mass in the quarries during the Christian persecution, according to Simon Lacordaire's "The Secret History of Subterranean Paris." During World War II, Resistance fighters used the network as hideouts.

People have been caught stealing telephone cables, "to resell the copper by the kilo," Rougerie said. Some have also been found carrying old bones from the catacombs.

Nearly two decades ago, there were reportedly 300 accesses to the quarries. Most have been sealed, but new entryways are uncovered by enterprising explorers.

Asked how many accesses exist today, Rougerie, the police official, conceded: "There are those I know and those I don't."