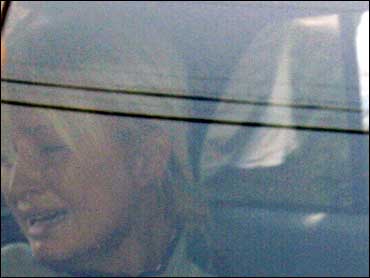 Paris Hilton was sent screaming and crying back to jail Friday after a judge ruled that she must serve out her sentence behind bars rather than in the comfort of her Hollywood Hills home.

"It's not right!" shouted Hilton, who was convicted of violating her probation in a reckless driving case. "Mom!" she cried out to her mother.

She was taken to a Los Angeles County jail facility for medical and psychiatric examination.

Hours earlier, the 26-year-old hotel heiress was taken handcuffed from her home in a black-and-white police car, with paparazzi sprinting in pursuit and helicopters broadcasting live from above. She entered the courtroom disheveled and weeping, hair askew, without makeup, wearing a fuzzy gray sweat shirt over slacks.

She cried throughout the hearing, dabbing her eyes, and her body shook constantly. Several times she turned to her parents, seated behind her in the courtroom, and mouthed, "I love you."

Despite being ordered to serve the remainder of her original 45-day sentence, Hilton could still be released early. Inmates are given a day off their terms for every four days of good behavior, and her days in home detention counted as time served.

The order has Hollywood wondering if the time in jail will be a shot in the arm, a kick in the pants, or just too much for a woman whose image is built on being a naughty girl and a spoiled brat, reports CBS News correspondent Bill Whittaker.

Superior Court Judge Michael T. Sauer was calm but apparently irked by Sheriff Lee Baca's decision to release Hilton three days into her sentence due to an unspecified "medical condition."

Baca denies accusations of favoritism in his decision to allow Paris Hilton to leave jail.

Baca says Hilton had been ordered to spend an unusually long time behind bars for the crime.

Under his department's early release program, Baca said Hilton would not have served any time in jail and would have been put on home electronic monitoring.

He said "The special treatment, in a sense, appears to be because of her celebrity status." "She got more time in jail."

The hearing was requested by the city attorney's office, which had prosecuted Hilton and wanted Baca held in contempt for releasing Hilton despite Sauer's express order that she must serve her time in jail. The judge took no action on the contempt request.

A member of the county counsel's staff said Baca was willing to come to court with medical personnel. The judge did not take him up on the offer.

Assistant City Attorney Dan F. Jeffries argued that Hilton's incarceration was purely up to the judge. "Her release after only three days erodes confidence in the judicial system," he said.

Hilton's attorney, Richard Hutton, implored the judge to order a hearing in his chambers to hear testimony about Hilton's medical condition before making a decision. The judge did not respond to the suggestion.

Another of her attorneys, Steve Levine, said, "The sheriff has determined that because of her medical situation, (jail) is a dangerous place for her."

"The court's role here is to let the Sheriff's Department run the jail," he said.

The judge interrupted several times to say that he had received a call last Wednesday from an undersheriff informing him that Hilton had a medical condition and that he would submit papers to the judge to consider. He said the papers never arrived.

Every few minutes, the judge would interrupt proceedings, state the time on the clock, and note that the papers still had not arrived.

He also noted that he had heard that a private psychiatrist visited Hilton in jail, and he wondered if that person played a role in deciding her medical needs.

2The last attorney to speak was another deputy city attorney, David Bozanich, who declared, "This is a simple case. There was a court. The Sheriff's Department chose to violate that order. There is no ambiguity."

Hilton's twisted jailhouse saga began Sept. 7, when she failed a sobriety test after police saw her weaving down a street in her Mercedes-Benz on what she said was a late-night hamburger run.

She pleaded no contest to reckless driving and was sentenced to 36 months' probation, alcohol education and $1,500 in fines. In the months that followed she was stopped twice while driving on a suspended license. The second stop landed her in Sauer's courtroom.

Back before Sauer on Friday, Hilton's entire body trembled as the final pitch was made for her further incarceration. She clutched a ball of tissue and tears ran down her face.

Seconds later, the judge announced his decision: "The defendant is remanded to county jail to serve the remainder of her 45-day sentence. This order is forthwith."

Eight deputies immediately ordered all spectators out of the courtroom. Hilton's mother, Kathy, threw her arms around her husband, Rick, and sobbed uncontrollably.

Deputies escorted Hilton out of the room, holding each of her arms as she looked back.

CBS News legal analyst Andrew Cohen says that Hilton's lawyers can appeal the ruling and try to get her released earlier.

"At a minimum she probably won't have to serve the full 45 days — probably won't be punished for the role she played in this sorry episode. But I can't imagine that too many appeals judges will want to rush to her rescue," Cohen says. "The real bad actor here wasn't Hilton; it was the sheriff, the people in charge of the prison, who allowed her to leave jail yesterday without first checking with the prosecutor and checking with the judge. And I'm surprised the judge didn't come down harder on the sheriff and a little less harsh on Hilton."