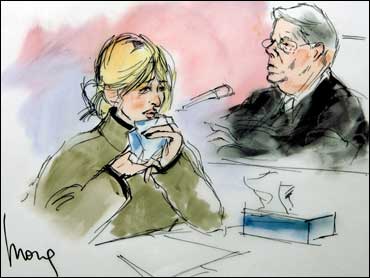 Paris Hilton said Saturday she was "learning and growing" from her time behind bars and has decided not to appeal her 45-day jail sentence for probation violation in a reckless driving case.

The hotel heiress was at a maximum-security detention center, where she was believed to have undergone medical and psychiatric evaluations to determine the best jail to keep her in.

"Being in jail is by far the hardest thing I have ever done," Hilton said in a statement released by her lawyer, Richard A. Hutton. "During the past several days, I have had a lot of time to think and I believe that I am learning and growing from this experience."

Hilton, in tears and screaming for her mother, was taken to the downtown Twin Towers detention center Friday after a judge ordered her back to jail, ending her brief stint under house arrest at her Hollywood Hills home.

"The Simple Life" star had been escorted from the courtroom shouting "It's not right!"

Hilton's lawyers sought to keep her out of jail on grounds that the 26-year-old was suffering an unspecified medical condition. Superior Court Judge Michael T. Sauer suggested that could be taken care of at jail medical facilities.

Hutton did not respond to repeated calls from The Associated Press to verify the statement but another Hilton attorney did confirm it was authentic.

With Hilton back in jail, Hollywood is wondering if the time behind bars will be a shot in the arm, a kick in the pants, or just too much for a woman whose image is built on being a naughty girl and a spoiled brat, reports CBS News correspondent Bill Whittaker.

As Hilton sits in the downtown Twin Towers jail, one question lingers: Was celebrity justice served?

There was no shortage of twists and turns throughout the week after Hilton made a surprise visit Sunday to the MTV Movie Awards, where she told a throng of media that she was scared but ready to face her sentence.

Hours after the event, Hilton checked herself into jail and was expected to serve only 23 days because of a state law that requires shorter sentences for good behavior.

The ensuing drama erupted Thursday when sheriff's officials released Hilton because of a medical condition and sent her home under house arrest. She had been in jail for three days.

Friday's hearing was requested by the city attorney's office, which had prosecuted Hilton and wanted Sheriff Lee Baca held in contempt for deciding to reassign Hilton to home detention despite Sauer's express order that she must serve her time in jail.

Sauer gave no explanation of his ruling to send Hilton back to jail, but his comments throughout the hearing indicated he was affronted by Baca's decision to set aside his instructions and release the celebutante to her Hollywood Hills home.

"I at no time condoned the actions of the sheriff and at no time told him I approved the actions," he said. "At no time did I approve the defendant being released from custody to her home on Kings Road."

2Hilton's lawyers said the reason for her release was an unspecified medical condition. The judge suggested that could be taken care of at jail medical facilities.

CBS News legal analyst Andrew Cohen says that Hilton's lawyers can appeal the ruling and try to get her released earlier.

"At a minimum she probably won't have to serve the full 45 days — probably won't be punished for the role she played in this sorry episode. But I can't imagine that too many appeals judges will want to rush to her rescue," Cohen says. "The real bad actor here wasn't Hilton; it was the sheriff, the people in charge of the prison, who allowed her to leave jail yesterday without first checking with the prosecutor and checking with the judge. And I'm surprised the judge didn't come down harder on the sheriff and a little less harsh on Hilton."

Following the hearing, Baca said he decided to put Hilton under house arrest because he was concerned about a serious medical condition he could not disclose, though his further comments suggested psychological problems.

He said he had learned from one of her doctors that she was not taking a certain medication while she was in custody previously and her "inexplicable deterioration" puzzled county psychiatrists.

Baca charged that Hilton received a more severe sentence than normal, which he said would have been either no time in jail or being directly placed in home confinement with electronic monitoring.

"The only thing I can detect as special treatment is the amount of her sentence," the sheriff said.

Hilton will likely be held at the Twin Towers facility for at least a couple of days before determining what jail she will be held in, sheriff's spokesman Steve Whitmore said.

3Despite being reincarcerated, she could still be released early. Inmates are given a day off their terms for every four days of good behavior, and her days in home detention counted as custody days. It appeared that Friday would count as her sixth day. Baca indicated she would serve about 18 more days.

Hilton's path to jail began Sept. 7, when she failed a sobriety test after police saw her weaving down a street in her Mercedes-Benz on what she said was a late-night run to a hamburger stand.

She pleaded no contest to reckless driving and was sentenced to 36 months' probation, alcohol education and $1,500 in fines.

In the months that followed, she was stopped twice by officers who discovered her driving on a suspended license. The second stop landed her in Sauer's courtroom, where he sentenced her to jail.