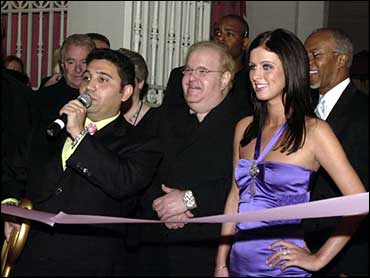 The pink carpet was rolled out, the pink spotlights danced through the crisp night air of downtown Orlando, and everything seemed in place for the opening of Paris Hilton's first nightclub. Notably missing: One pink-loving hotel heiress.

Hilton arrived six hours behind schedule — after many guests had left. At least she had an heiress-appropriate excuse handy.

"I was in the Swiss Alps skiing and I got caught at the airport with all the holiday travel so I've been trying to travel for the past 24 hours," a smiling Hilton said after stepping out of a stretch SUV in front of the club shortly after 1 a.m. Friday.

After her friends, shouting "WOOOO," ran out of the nightclub to hug and kiss her in greeting, she apologized for her tardiness. "I'm so sorry I'm late."

"Believe me, we have free drinks inside," co-owner Fred Khalilian nervously told the crowd after he announced that Hilton had missed a flight back to the United States.

"This kind of stuff happens — you miss a flight," said former 'NSync singer Joey Fatone, one of the few celebrities to show up despite promises from Khalilian that a list of celebrities had been invited.

Other patrons of Club Paris were less forgiving. "(Khalilian) better get Paris here or this club isn't going to last," said Nancy Chepenik.

"The Simple Life" star was obligated to make four appearances a year at the Orlando location, the first of what is planned to be a chain of Club Paris nightspots, said Hilton's entertainment attorney, Peter Lopez. If all goes well, other clubs will open in Las Vegas, Miami, New York, Los Angeles, Atlanta, London, Paris and Madrid.

Khalilian put almost $3 million into upgrading the space. Hilton didn't put up any money and was made a partner. She also received a substantial up-front payment and a Ferrari, which Hilton described as "hot" after jumping into it to pose for photos.