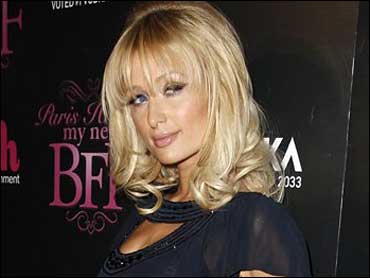 Watch out world: Paris Hilton is continuing her bid for the White House.

The paparazzi darling and reality TV star touted her candidacy in a video on FunnyOrDie.com Wednesday - her second appearance in a political spoof on the site.

"Running for fake president is a little daunting," a heavily made-up Hilton tells Martin Sheen, whom she calls "one of our greatest fake presidents."

"Being a fake president is a lot harder today than it was when I was a fake president," says Sheen, who has often played American presidents, most notably on TV's "The West Wing."

Hilton talks with Sheen about "Fo Po" - "Foreign policy, silly" - and shares what could be her real views on the economy and the war in Iraq.

"Iraq has a Democratic government that is asking for us to leave," she says. "It seems that we've done our job and we should bring our troops home safely."

Economically, "this is the biggest depression since 'The Notebook,'" Hilton says, adding that the government should "lower inflated interest rates so it's not impossible for (people) to pay their mortgage."

As Sheen tells Hilton she's "going to make a great fake president," his son, Charlie Sheen, pops in with a promise to "fake vote" for her.

Hilton bids the elder Sheen farewell with a kitten-voiced, "Bye, sexy," then tells the camera: "See you at the fake inauguration."

The 27-year-old heiress said in a statement that she hopes the video inspires people to consider the issues and vote in the real presidential election.

"I hope that my political opponents take in consideration the points that I have addressed because I feel that they are important and, as well as, that my generation and the new young voters should become more involved with our current issues and speak their voice through voting," Hilton said. "This is the most important presidential election in decades and voting is the only way that you have a voice for change."
By Sandy Cohen