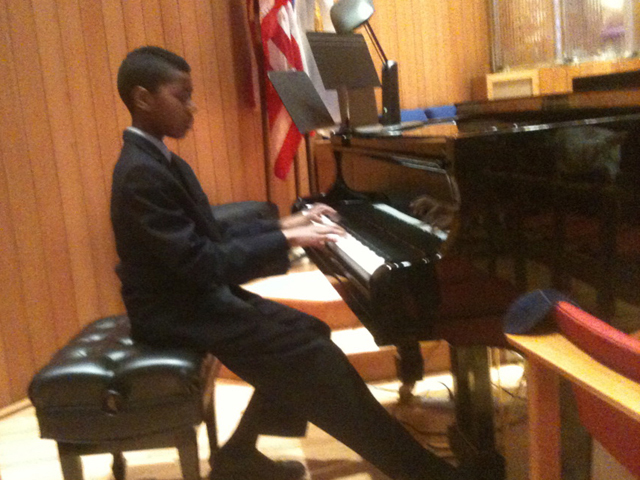 Parents are on the edge at this time of year in New York City, not just because the first semester grades are coming out or because kids are trying out for winter sports teams -- or because of the economic woes brought on by the holidays. Middle school parents are biting their nails as their kids take tests for the NYC specialized high schools, Catholic high schools and various other higher-end private high schools. Thousands of children have spent months (some years...others just wing it) sharpening math, writing and performing arts skills in preparation for the tests.

Each year, tens of thousands of New York City 8th and 9th graders take the Specialized High Schools Admissions Test (SHSAT). It's used to determine admission to all but one of the city's Specialized High Schools. These schools include Stuyvesant High and The Bronx High School of Science, two of the best public high schools in the country. The only one of the specialized schools that does not rely on this test (although grades and attendance are big factors) is LaGuardia High School for the Performing Arts, "the premiere performing arts high school in the country," according to the parent coordinator there. Here it's all about the audition. Last year, more than 9,000 students auditioned for 664 spots.

This past Saturday, my son Phillip and I arrived at LaGuardia around 7:30 a.m. for a scheduled 8 a.m. audition. Phillip has studied piano for 11 of his 14 years at The School for Strings in Manhattan. He had been working on two pieces of music with Ms. Elke (Velazquez), his music teacher for the past several months. My husband, a keyboardist and sax player, pushed very hard for Phillip to play a piece of music by the composer Debussy called Arabesque, while Ms. Elke pushed for a Prokofiev's Prelude. Phillip prepared both.

We walked into the building with me shivering from the cold and the anticipation of the audition. Phillip just bobbed along with no hint of jitters. He just hoped the audition would be done in time for basketball practice. He'd actually much prefer the NBA to the New York Philharmonic -- so annoying -- but I digress.

As we were walking down what seemed like a very long entrance hallway, I was giving Phillip all kinds of advice: show energy, make sure your playing is crisp and dynamics are pronounced, make them know you want to be there, tell them you have prepared TWO pieces not just one, blah, blah, blah. Before I got halfway through my monologue, a voice shouted "PARENTS THAT WAY." Phillip was waved in another direction. We got one last look at each other, and he was gone.

I was directed, along with a mob of other parents, up to the 5th floor cafeteria. The parents association had bagels, coffee and other breakfast treats for us as we took off our coats and prepared to sit for a minimum of two hours to receive our talented young performers back. Some would be there much of the day because of kids auditioning for more than one studio, dance and vocal or instrumental music and art.

I sat with other parents, two from the Bronx. One mother's child hopes to become a professional singer, another dreams of a career as a dancer. Table after table, parents chatted and swapped stories of hard work to get to this moment. We talked about the declining arts programs in schools, the movie "Waiting for Superman," the new city schools chancellor Cathie Black, our hopes and dreams for our kid, the economy, current movies, current events ... but mostly we worried about how our children were doing. Would they perform their best? Will the judges recognize their talent? Would they forget their lines or moves or notes? Were they dressed in the proper outfit? Many of us had argued with the kids earlier in the morning about what best to wear.

Finally, Phillip arrived at the cafeteria to meet me. He was the first child of our little cafeteria table group to return. We all went nuts with questions. How did you do? What was it like? Tell us every detail. What did the teachers' panel say to you before you started? What did they say afterward? Were they nice? Did you get any sense of how they felt? It was endless.

Phillip tried his best to answer before running off to get a bagel. He said he was in there for about six minutes and was stopped just before the most beautiful section of his Debussy number. I was in astonished. What??!! After all that preparation????????!!

"Did you play the Prokofiev," I asked. "I couldn't," he said. He had to show he could carry a tune, tap out a beat and do some music reading. When that was finished, he was thanked and that was that.

Oh well, now we wait until a day in February when each and every child finds out -- on the same day -- whether or not he passed the audition and/or made it into one of the other specialized high schools. Pins and needles for my husband and me -- and thousands of others.