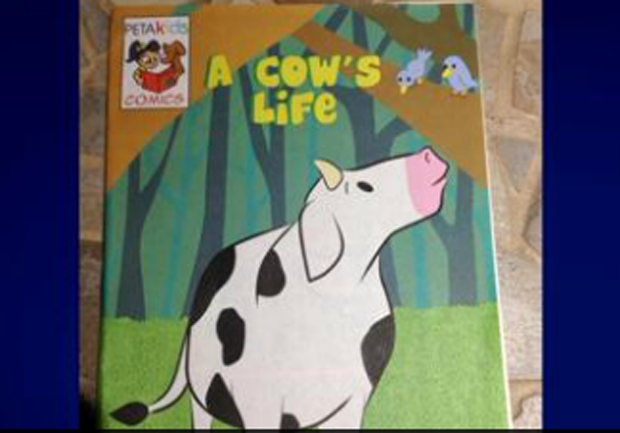 Claire Borsheim and many other parents at the Woodland Hills campus were outraged after PETA handed out the pamphlets to their children the same day a baby cow was on campus for a lesson about dairy farming.

The pamphlet appeared to be a cartoon comic and was titled “A Cow’s Life,” but the images inside were horrifying, parents said.

“My 6-year-old daughter was handed one of these comics, saw the insert of the mutilated cow that I ripped away right away, she started flipping through it and saw pictures of baby cows being electrocuted, factory farms with machetes, I mean, just graphically horrifying images for a 6 year old,” Borsheim said.

The graphic leaflet showing cows being dehorned and cows with infected udders was hidden in what PETA says is a kid-friendly pamphlet about dairy cows – literature they say is meant to be educational.

PETA Executive Vice President Tracy Reiman apologized Wednesday evening, saying the pamphlets had been meant for parents so they could talk to their children about the dairy industry's treatment of cows.

"As the mother of a 10-year-old, I know that kids have a natural empathy for animals but may not understand the connection between the animals they see in picture books or on farms and the food on their plates. Our comic book was designed with the help of parents and educators in order to help start honest discussions with kids about helping animals," Reiman said in a letter to principal Esther Gillis.

She said that as a peace offering, PETA was offering to provide non-dairy ice cream sandwiches to students and staff.
It was not clear how the apology would go over with parents, who said the animal-rights organization had gone too far.

“(Children) don’t understand what it is, they just see these graphically horrifying images that stay in their minds,” Borsheim said. “It’s like seeing a bad movie, a scary movie for them and they can’t get it out of their minds.”

Los Angeles Unified School District officials released a statement regarding the PETA pamphlet distributed to students. It read in part:

“No one at the school, or the District knew that animal activists would give children a comic book containing graphic images inserted of cows with a sore; an infection; chained and covered with fecal matter. The pictures are inappropriate for elementary students.

“Principal Esther Gillis would never have authorized the distribution of those pictures or the message that milk is unhealthy. L.A. Unified is committed to providing a safe and respectful environment at our schools.”