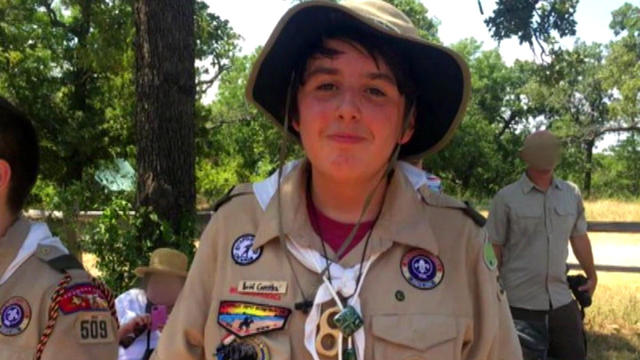 The family of a 15-year-old is suing the Boy Scouts of America for his death on a backpacking trip in June. Reid Comita was pursuing his final merit badge to become an Eagle Scout when he collapsed and died of heatstroke in remote west Texas.

Reid's parents are suing the Boy Scouts of America for wrongful death. They say they signed their son up for a beginners' backpacking course, but he ended up on a more difficult trail in 99-degree heat. The teen ended up collapsing on a remote part of the trail and police say it was nearly impossible for paramedics to reach him in time, reports CBS News' Omar Villafranca.

Reid collapsed in the remote location and police say it was impossible for paramedics to reach him in time. He had been earning badges in the Boy Scouts since he was in first grade.

"Every time he walked through that door he was very excited to show me, 'Look what I got mom!'" said Reid's mother, Copper Comita.

He was one merit badge away from the 21 needed to become an Eagle Scout.  To earn his final merit badge, Reid signed up to complete an introductory backpacking trip at the Buffalo Trail Scout Ranch where his parents expected he would learn outdoor skills for two days before heading out with two adult leaders.

"I felt like he would receive the education that he needed to be able to do what was asked of him on an introductory hike," Copper said.

"For what we had signed him up for, he was more than able," said Reid's father, John Comita.

But Reid's parents say he was unexpectedly moved to a more advanced hiking group and they took off days earlier than planned – in 99-degree heat. He collapsed on the trail.

Asked who he blames, John said, "I blame the BSA. Boy Scouts of America."

In their lawsuit the Comitas say the Scouts went against their own guidelines by sending Reid out with a 14-year-old and 18-year-old instead of the two adults their policy requires. They also say the camp director should have altered their hiking plans in the extreme heat.

"They violated several of their policies for safe scouting," John said.

The Boy Scouts of America said they can't comment on ongoing litigation, but released a statement saying, "The health and safety of our youth members are of paramount importance...We strive to create a safe environment for youth to experience outdoor adventure."

Reid was airlifted from the trail, but his parents say they weren't told their son had died for 4-and-a-half hours after his death. Three months later, they're still trying to adjust to life without their only son.

"I miss him singing upstairs in the bathroom. I miss picking him up from school. I miss his hugs. I miss his presence," John said.

The Comitas are suing the Boy Scouts of America for $1 million. They say they've yet to hear from the national office, but Reid's own troop has since awarded him the merit badge for camping, posthumously.

Tillerson opens up on Trump and his firing