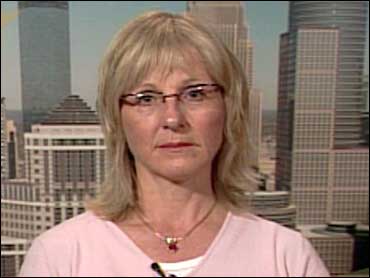 New safety questions are being raised about a series of dangerous caves along the Mississippi river in St. Paul, Minn., where three people died this week. Inside the caves is a maze of treacherous underground passages.

Five teenagers visited there Tuesday, April 27, for what was supposed to be harmless adventure. Only two made it out alive. The Early Show co-anchor Harry Smith reports they are among five people who have died in those caves in the last two decades.

Maggie Boucher's son was one of the lucky ones. Looking at the crosses raised in memory of the three victims, she says, "They'll never graduate high school. They'll never go to college. And they were very special people."

Her 19-year-old son, James, remembers holding on to one girl's hand before he blacked out.

Maggie Boucher says, "He screamed for his friend, he couldn't find her. So he knew he had to get help."

Nicholas Larson, Natalie Vanvorst and Patrick Dague, who were all 17, didn't make it out alive.

They died from carbon monoxide poison some 600 feet from the entrances in passages that stretch for miles. The lethal gas may have been caused by a smoldering fire inside the caves. The caves have been around since the 1800s and for decades they have lured young people looking for a thrill or for an escape.

Everyone going into the caves faces danger. Forty rescuers had to form relay lines hundreds of feet underground. The exhausted firefighters ended their recovery efforts with a plea.

Back in 1992, two young women lost their lives in the very same cave. Carol Mueller's daughter was one of them.

Mueller says, "It was a glorious fall day. She and some friends were at a local park. They asked for an extended curfew because the evening was so lovely. We agreed to extend an 11:00 curfew until 12:00, assuming they were staying at the same park.

"Unfortunately," Mueller adds, "the parks closed and the kids looked for another place to go because, heaven forbid, they come home early when they have an extended curfew. They went to the caves. Little did we know. Two days later the sheriff showed up at our door to tell us they had found the girls' bodies."

When she found out the same thintg had happened to other teens this week, she says her reaction was, "My God, please not again, way too often. This cannot continue."

But Mueller thinks more should be done. "We have the capability, technology to put men on the moon. We can implode skyscrapers, but we can't close off caves that are deadly? They are death traps. The city wouldn't even put up a 'Danger' sign. The city would only put up: 'No Trespassing.' We need to definitely not wait for a public official to be in the cave to raise more awareness about the danger of these and permanently destroy them."

Mueller is certain her daughter did not know of the dangers when she went in the caves 12 years ago.

She says, "I firmly believe it was the first time she's ever been there. The kids she was with, it was their first experience. I knew nothing of the caves. I want awareness. That's the whole purpose of our conversation. I want some awareness.

"As a parent, I have a responsibility to help my child make decisions. If I can't even bring up the topic and discuss it, they aren't armed. The children aren't armed to make decisions when confronted with a situation. I would never have known. If she had told me she was going to the caves, I would have probably said, be careful. I would have never thought of carbon monoxide. Never occurred to me".