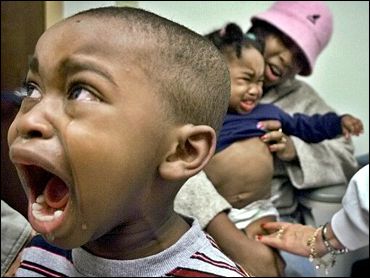 Some children sob, others scream, and some get so upset they have to be restrained by medical staff. But a new study suggests parents can ease the anxiety about immunizations by telling a joke, reading a book or bringing a favorite toy from home.

Other proven distraction techniques include blowing soap bubbles and, for babies under six months, using a pacifier dipped in sugar water.

"All of those kinds of things can take children's minds away from the needle poised to go into their arm," said lead author Dr. Neil L. Schechter, the director of the Pain Relief Program at Connecticut Children's Medical Center.

The study appears in the May edition of Pediatrics, scheduled for release Monday.

Parents who are overly apologetic or excessively reassuring during the procedure can actually cause more distress, the research found. Instead, parents should adopt a "matter-of-fact, supportive, non-apologetic approach," researchers said.

The 2007 immunization schedule from the U.S. Centers for Disease Control and Prevention recommends 10 vaccines for children under the age of 6, with most requiring multiple doses.

Schechter's team reviewed hundreds of previous studies regarding pediatric immunizations and referenced about 120 in their article, in which they also make recommendations for doctors.

While some may dismiss the shots as a rite of passage, children's fear can interfere with important discussions pediatricians need to have with parents, said Schechter, who is also a professor of pediatrics at the University of Connecticut School of Medicine and a pediatrician at Hartford's St. Francis Hospital.

Rogers said she believed the study was a valuable one. While somewhat surprised with findings that overly empathetic parents can cause more distress, she theorized it's because children became scared and confused when they feel their parents lack control over a situation.

She carries a "distraction bag" packed with pinwheels, bubbles, whistles and books, and she also helps young patients practice relaxation and breathing techniques.

Rogers said it's important parents not bargain with their child, instead emphasizing while it's OK to feel scared, the medical procedure is designed to help them and the child isn't being punished.

"I think kids are pretty smart. They know how to drag something out," Rogers said. "Parents need to emphasize this is something we need to get done."

Rubel, who owns a public relations firm, said she and her husband emphasize to Ford and their 7-year-old daughter that the shots "are part of the growing up process, part of staying healthy and taking care of yourself."

Still, Rubel remembers as a child kicking her pediatrician in the shins and hiding under a table before an immunization. And during his most recent shots, her son cried and afterward dramatically walked with a limp, complaining of how much the shots hurt.

She gave him a hug, then quickly tried to change the focus.

"It's very hard for me not to cry when you see your child feeling pain," she said. "I don't know any parent who doesn't get upset."