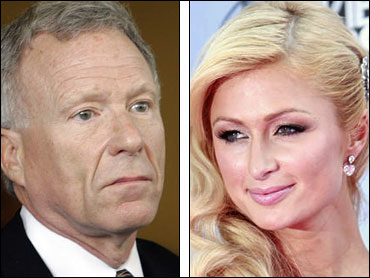 There was a great hue and cry last week when Paris Hilton was temporarily released from jail and placed under house arrest after only three days, despite a judge sentencing her to 45. The words "special treatment" were in the air. I hope there will be at least the same amount of outrage if Vice President Dick Cheney's former chief of staff, I. Lewis "Scooter" Libby, is pardoned, despite being found guilty by a jury and sentenced by a judge. Maybe it's just me, but I think Americans should get just as upset about someone in a trusted political position who breaks the law as we do about someone who's famous primarily for not wearing underwear in public.

After some drunk driving incidents, Paris Hilton was sentenced to jail for violating the terms of her probation by driving after having her license suspended. When the sheriff suddenly released her from jail, it took the prosecutor, the judge who sentenced her and much of the public by surprise. They felt that Paris should not have been let out of jail and sentenced to stay at her house, where lying out at the pool might rid her of the "psychological problems" that supposedly prompted her release. They thought she was getting special treatment because she was rich and famous. (However, there is no truth to the rumor that the electronic bracelet she was given was purchased at Tiffany's.)

There could be a much more serious situation if Scooter Libby is pardoned. Immediately after he was sentenced, some people weren't wondering "if" President Bush would pardon Libby, but "when." Even some Republican candidates for president have said they see nothing wrong with a presidential pardon for Libby. And they wonder why so many people distrust politics?

The crimes that Libby was found guilty of were very serious. He's not a spoiled heiress who was caught driving an expensive car after dark with no headlights on. He was convicted of one count of obstruction of justice, two counts of perjury, and one count of lying to the FBI. And what he was convicted of lying about was how he learned the identity of a CIA agent whose name and identity were eventually leaked to the press. Can you imagine if an ordinary citizen like you or me had been found guilty of lying to the FBI? Do you think anyone would be calling for our pardon if we had obstructed justice in a case involving the identity of a CIA agent — especially during this time when national security is so important?

I know that Libby maintains that he didn't really lie to the FBI, but that he simply has the worst memory this side of dementia. I know that legally President Bush may pardon Libby. And I know that there is precedent for such an act. President Ford pardoned Richard Nixon, and President Clinton pardoned financier Marc Rich. But neither of these acts is among the proudest moments in American history.

And that's the point. This isn't just about what the president has the power to do. It's also about the perception of the presidency and of the way our country is governed. The president has a choice. He can say something like, "I don't agree with the verdict or the sentence, Mr. Libby has performed great service to his country, but I'm not going to interfere in a decision made by a lawful judge and jury." Or he can act in a way that will make people think the attitude in the White House is, "It doesn't matter what one of our guys does — even if he's found guilty by a jury and sentenced by a judge. The president can always just pardon him."

Yes, he can. But if he does pardon Libby, I hope the American people don't pardon him for doing so.

Lloyd Garver has written for many television shows, ranging from "Sesame Street" to "Family Ties" to "Frasier." He has also read many books, but never in jail.