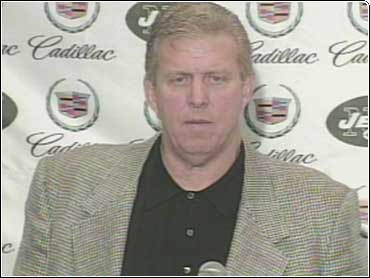 Bill Parcells resigned as director of football operations of the New York Jets on Tuesday, saying he's not ready for the commitment needed to make the team a consistent title contender.

"The realization that a long-term commitment is now in order to serve the organization's best interest is the main reason not to continue," Parcells said in a statement released by the Jets.

Parcells' resignation takes effect at the end of the month. He met for several hours with owner Woody Johnson on Monday, the second time the two had discussed the Jets' future in the past week.

"We are obviously disappointed that Bill Parcells has made his decision not to return to the New York Jets next season," Johnson said. "During his tenure with the Jets, he resurrected a franchise that had been struggling for a number of years."

Since Groh left, Johnson had tried to persuade Parcells to stay and perhaps even return to coaching.

The Jets failed to make the playoffs this season despite needing just one win in their final three games. New York dropped all three, including a 34-20 loss to Baltimore on the final day of the season, and finished 9-7 in Groh's only year as coach.

Parcells' departure adds to the instability of the team. Since the end of the 1989 season, when Joe Walton was fired, the Jets have had Bruce Coslet (four seasons), Pete Carroll (one), Rich Kotite (two), Parcells (three), Bill Belichick (one day) and Groh as coaches. Groh was elevated last January after Belichick resigned after one day on the job.

Parcells made his reputation of turning losers into Super Bowl contenders. But he failed to get the Jets to the title game even though he rebuilt the team from the minute he took over as coach in '97.

During his tenure, he brought in quarterback Vinny Testaverde, running back Curtis Martin, linebacker Bryan Cox and others and used the draft to wheel-and-deal for extra selections.

Calling the shots before and after he promoted Groh to coach, Parcells traded star wide receiver Keyshawn Johnson to Tampa Bay before the draft, and the Jets wound up with a record four first-round picks.

With Tesavede returning from a torn Achilles' tendon, the Jets jumped to a 9-4 record and appeared in control of the AFC East. But then came the collapse: losses to Oakland, Detroit and finally the Ravens.

Before Parcells' resignation, Jets assistant head coach Maurice Carthon was the leading contender to replace Groh if the team decides to hire within the organization.

"While it will be hard to replace someone of Bill's ability and leadership, we intend to use all our efforts to build on what he started by creating a first-rate management team," Johnson said.

Johnson bought the Jets a year ago from the estate of the late Leon Hess for $635 million.