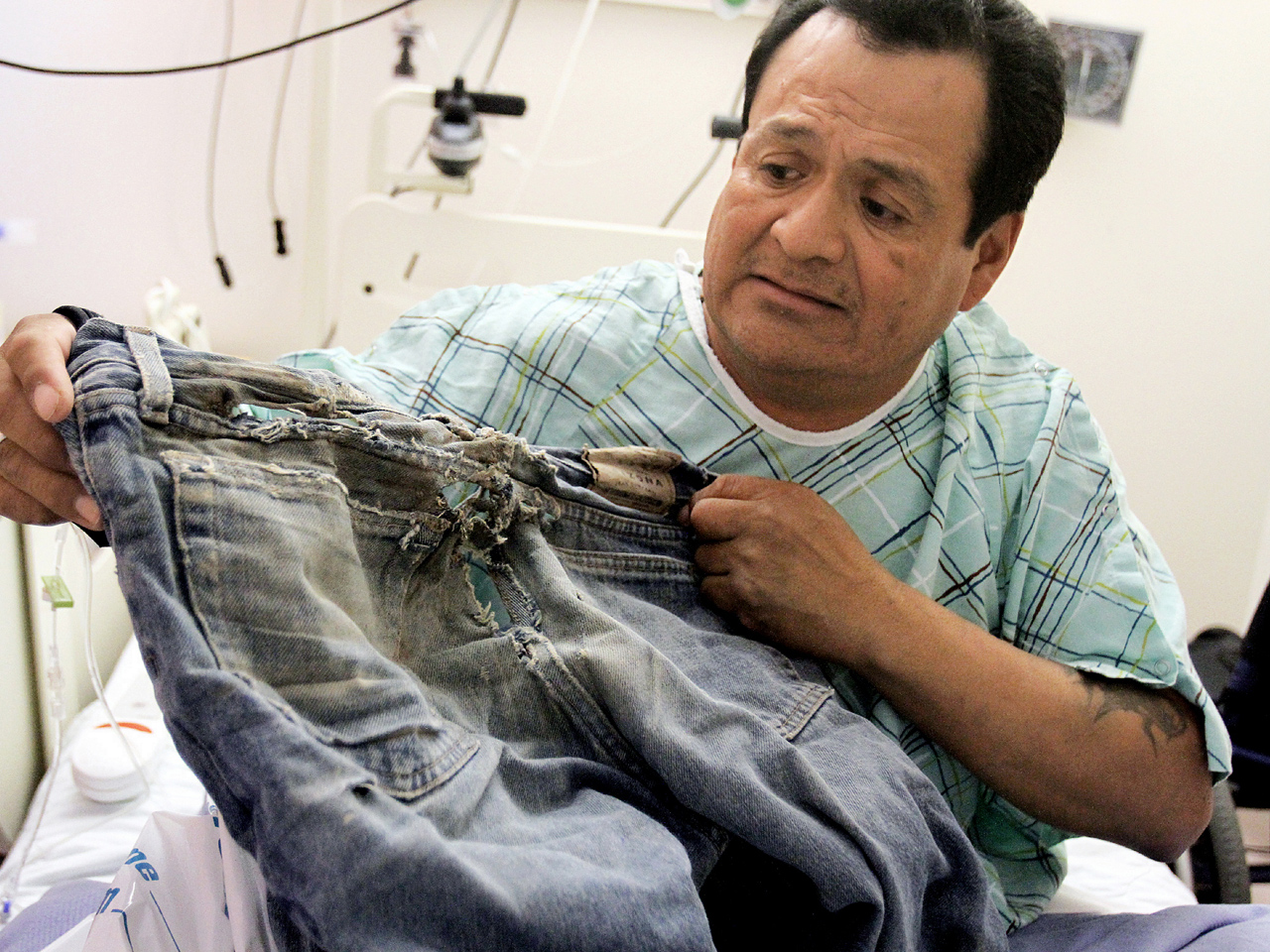 ALBUQUERQUE, N.M.A paraplegic man who says he was stranded in the New Mexico desert without his wheelchair dragged himself about four miles down a dirt road over three days before a motorist stopped to help him.

Tattered and dirty, Ricky Gilmore's blue jeans tell part of the story. His body tells the rest — the skin on his left leg and buttocks is shredded, his wrist is sprained and his kidneys are in bad shape from going without food and water.

"Ah man, I'm just a big mess. I ache and I'm just in the first stages of healing," he told The Associated Press on Tuesday from his hospital bed at the Northern Navajo Medical Center in Shiprock, N.M.

Gilmore, 49, is being treated for acute kidney failure from dehydration, a sprained wrist and a blood infection. He spent two days in intensive care and it could be at least another week before he can go home.

The Farmington Daily Times first reported Gilmore's story. He was found along a seldom traveled road on the Navajo Nation about 10 miles from his home in Newcomb, which is on the eastern side of the reservation.

Gilmore said he was dropped in the desert by a couple in a white truck who he met while he was hitchhiking. He had invited them to his home for steaks and they later went for what Gilmore thought was going to be a joyride.

When he declined to share his alcohol with them, Gilmore said the man grabbed him by his feet and threw him out of the truck while parked along the desolate road.

It was early evening and Gilmore had nothing — no wheelchair, no food, no water, no coat — to help him endure the flat desert scrubland.

"It was dark and I was shivering and the wind was blowing so I just crawled to a bush and dug in right there. It was cold that night," he said.

With the sunrise, survival mode kicked in.

"I started dragging myself. I did the same thing all day and I only got about two miles," he said.

Two people passed by. Gilmore tried flagging them down but they only honked and kept going.

After spending a second night at the side of the road, Gilmore said he woke up sore and thirsty and didn't want to move.

"I could have easily gave up and said forget it, but I said I'm not going to freeze out here and I just kept on going," said Gilmore, who lives by himself and lost the use of his legs in a car crash years ago.

On the third afternoon, a man in a blue pickup truck stopped and called for help. Gilmore said doctors told him his body temperature was 94 when he was found.

"I don't think I would have made it another night," he said.

The Daily Times reported that Gilmore filed a report with the Shiprock Police Department. There were no officials at the department after hours Tuesday who could confirm details of the report.

Gilmore said he's bandaged up "big time" and morphine is helping with the pain. Still, he had a nightmare Monday night in which he found himself sitting at the edge of a freeway waving his hands at the passing traffic, but no one looked at him.

His plan is simple for when he gets released from the hospital: "Go home and pray, take inventory and just get a good night sleep in my own bed and heal."