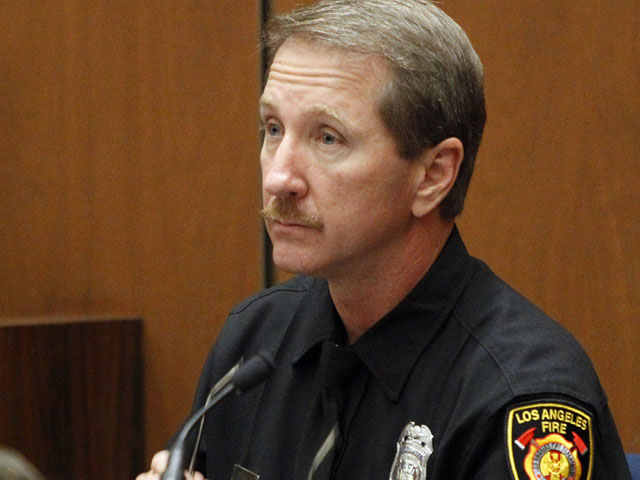 (CBS/AP) LOS ANGELES - A paramedic, who answered the 911 call at Michael Jackson's home on the day of the singer's death, told the court Friday that Murray told him Jackson went down just before he placed the 911 call. Richard Senneff said this gave the impression that "we had a good chance of saving Jackson." Senneff also said Murray never mentioned he'd been giving Jackson a powerful anesthetic.

Murray contends only 10 minutes elapsed between the time he found Jackson unresponsive and the time 911 was called. However,  prosecutors insisted Murray waited at least 25 minutes before instructing another Jackson employee, Alberto Alvarez, to call 911.

Murray, 58, has pleaded not guilty to involuntary manslaughter. If convicted, Murray could face up to four years in prison and lose his medical license.

Prosecutors contend the Houston-based cardiologist repeatedly lied to medics and emergency room doctors about medications he had been giving Jackson in the singer's bedroom.

Authorities contend Murray administered a fatal dose of propofol and other sedatives. Murray's attorneys claim Jackson gave himself the fatal dose after his doctor left the room.

Senneff was the first paramedic to reach Jackson's bedroom and said within moments, he and three other paramedics were working to revive Jackson.

After trying multiple heart-starting medications and other efforts, Jackson was still lifeless.

Emergency room personnel at a nearby hospital advised Senneff to declare Jackson dead in his bedroom, but the singer was transported because Murray wanted life-saving efforts to continue.

Prosecutors on Friday also called an executive for the maker of a fingertip medical device used by Murray to monitor oxygen in Jackson's blood.

Nonin Medical executive Bob Johnson told jurors the $275 device was not adequate to continuously monitor patients because it did not have an audible alarm and other features that would alert a caretaker to problems.

Jurors also heard from a former Murray patient who lauded the doctor's treatment of him, but said his cardiologist became increasingly distant and hard to reach while working with Jackson.

"I felt like I was getting the best care in the world," said Robert Russell of Las Vegas, before Murray became the singer's personal physician.

After Murray began treating Jackson, Russell said he couldn't get answers about his own treatment. He called Murray's office on June 25, 2009 -- the day Jackson died -- and demanded to speak to the doctor.

The doctor left him a voicemail at 11:49 a.m. Prosecutors are using records to show that Murray was on the phone in the moments before he realized Jackson was unconscious.

Prosecutors are expected to call another paramedic who treated Jackson.

Murray's trial is expected to last five weeks and is in its fourth day.