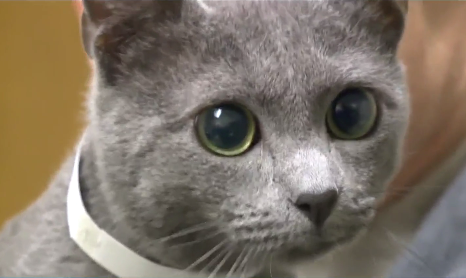 DAVIS, Calif. — Against all odds, a cat suffering from a rare spinal cord infection is back on all fours, CBS Sacramento reported.

Just three months ago, Gray was paralyzed from the waist down.

His owner Jack Hill was living in Hawaii when he found him. Hill noticed Gray was having difficulty with his back legs. Within days, he lost his ability to walk altogether.

Hill made a commitment to Gray and flew him to the world-renowned UC Davis Veterinary Hospital in California.

He was diagnosed with an infection of his spinal cord and surrounding vertebrae. Compression or pressure on the spinal cord in the area infection made it impossible for him to move or feel pain in his hind legs.

His doctors were concerned he’d never walk again, but Hill was committed to doing whatever was necessary to help Gray.

Doctors removed part of the vertebrae to get rid of any infected material and take pressure off of Gray’s spinal cord. After the surgery, Gray was still in good spirits, but not walking. He began to move his legs, and five weeks after the surgery he was up and walking again.

“He’s a bullet, that’s the best way to describe him,” Hill said. “He chases my older cat around. If you didn’t know he has a limitation, you would not know there was a problem.”

Cats may have nine lives, and because of Hill and UC Davis vets, Gray will be able to walk in all of them.

Hill and his family moved to California, because if they returned to Hawaii, Gray would have to be quarantined for six months, and that’s something they couldn’t put the cat through.