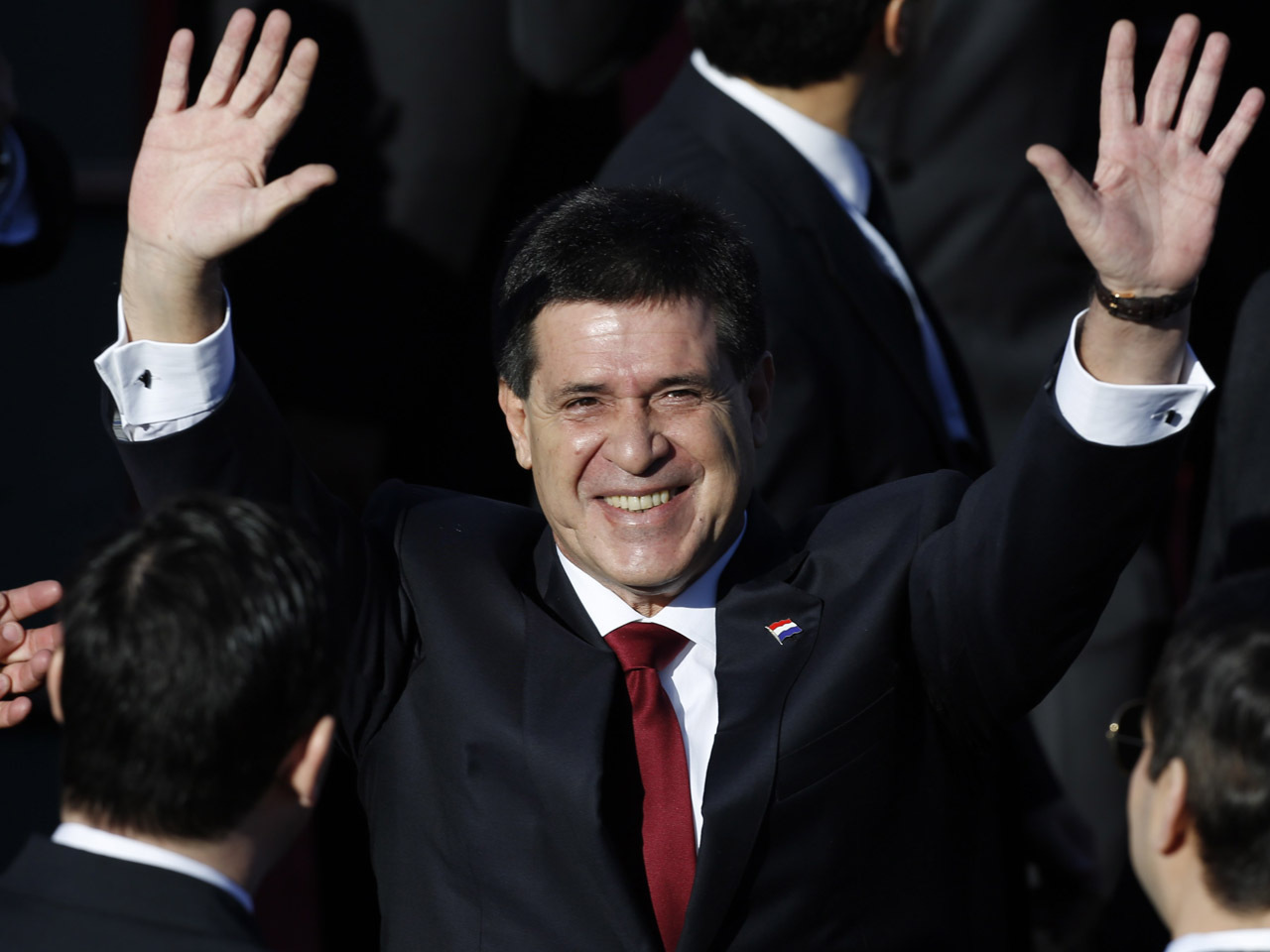 ASUNCION, Paraguay Multimillionaire Horacio Cartes declared a war on poverty Thursday as he assumed the presidency of Paraguay, one of the most unequal nations in South America and a place where his business dealings have made him a target of U.S. criminal probes.

Wearing Paraguay's red-white-and-blue presidential sash, the tobacco magnate said he intends "to win every battle in the war we're declaring today against poverty in Paraguay."

"I'm not in politics to make a career of it or become wealthier," said Cartes, 57, who promised to strengthen Paraguay's international ties and its commitment to human rights.

Cartes, whose term runs through August 2018, built a family fortune with two dozen companies that dominate industries from banking to tobacco to soft drinks to soccer, so much so that it will be difficult to make a move as president without generating complaints of conflicts of interest.

Cartes also is a political neophyte who never voted for president before running for the office, and often faced accusations that his wealth was fed by money laundering, cigarette smuggling and drug trafficking.

Paraguayan voters overlooked these allegations, focusing on hopes that the boyish-looking businessman from the dominant Colorado Party can help the country benefit more from soy profits that are boosting the economy at 10 percent a year.

Organizers said his most important encounter wouldn't be with fellow presidents but with 150 invited foreign executives eager to improve the infrastructure of the country of 6.2 million people, where 39 percent live in poverty.

His elected predecessor, Fernando Lugo, also promised to combat poverty, and like Lugo, Cartes is a political outsider, having joined the Colorado Party only in 2009. Otherwise, the divorced tobacco magnate is nothing like the sandal-wearing former bishop, who was impeached by congress last year.

Smuggling, corruption and tax evasion are endemic in Paraguay, and analysts believe it's difficult for executives not to come in contact with criminals at some point. The corruption watchdog group Transparency International ranks Paraguay 150th worst out of 176 countries. The U.S. Congressional Research Service reported in 2010 that "corruption is a major impediment to consolidating democratic institutions" in Paraguay.

He denied this in his only news conference with foreign media during the campaign.

"I wouldn't want to be president if I had ties to drug traffickers," he said. "Go to the courts and check. There's nothing, not a single charge against me. For years I've been a public figure in football, but as soon as I get into politics these kinds of stories pop up, circulated by bad people."

Cartes and his top executives aren't listed by the U.S. Treasury's Office of Foreign Assets Control as people whose assets should be blocked. U.S. citizens are not prohibited from dealing with them.

Cartes did spend 60 days in jail in 1986 during a currency fraud investigation, after allegedly making millions of dollars on a central bank loan obtained at a preferential exchange rate and then moved through his money exchange business before buying farm equipment in the U.S. That case was eventually dropped.

The region's well-documented trade in contraband cigarettes, smuggled over borders and resold without paying taxes, also made his tobacco companies a target of congressional and criminal investigations in Brazil, and in Argentina nearly half the cigarettes seized by tax agents come from his companies, the weekly Perfil reported. Cartes said any smuggling is done by others, and dismissed the issue as "a customs problem."

He exports Palermo cigarettes and imports Budweiser beer and Cuban cigars. He also leveraged his father's job as a Cessna representative into an aviation company with 80 planes that has trained most of the country's civilian pilots.

But U.S. officials said they were concerned enough to infiltrate his companies with undercover Drug Enforcement Administration agents to disrupt what they believed to be an organized crime operation that banked drug profits made in the Tri-Border Area, or TBA, a smuggling hotbed where Paraguay meets Argentina and Brazil.

"Agents have infiltrated Cartes' money-laundering enterprise, an organization believed to launder large quantities of United States currency generated through illegal means, including the sale of narcotics, from the TBA to the United States," the 2010 U.S. cable said.

Another cable, sent in 2007, reported that Paraguay's anti-drug chief, Hugo Ibarra, had told a U.S. Embassy official that the anti-money laundering chief Gabriel Gonzalez was really working for Cartes and his bank. Ibarra said Gonzalez told him that "80 percent of money laundering in Paraguay moves through that banking institution."

Cartes drew more attention once he began selling Palermo cigarettes across the United States in 2008, at prices the company said were 20 percent below the competition.

Phillip Morris, British-American, Reynolds and Imperial tobacco company officials met with agents from the DEA, the U.S. Bureau of Alcohol, Tobacco, Firearms and Explosives and the Justice and Treasury departments in a Panama City hotel in December 2009 to coordinate an undercover attack on Cartes, code-named "Operation Heart of Stone," the 2010 cable said.

Former CIA agent Frank Holder, whose mission included Paraguay, sees Cartes' political career as an effort to buy a sort of insurance policy against interference in his businesses.

"He had zero involvement in politics until 2008, when he goes into it in a big way," Holder said. "And that's when the Operation Heart of Stone case, which came out in WikiLeaks, starts going full swing."

Cartes insists he sought the presidency to improve Paraguay's economy, and has no criminal ties.

"It doesn't make sense that if I'm everything they say I am, there aren't any charges against me," Cartes said on his Facebook page. "I'm right here. If anyone has evidence, they should present it in court. If they want to beat me, do it legally, not like cowards spreading defamations."

Lugo's 2008 victory interrupted more than five decades of Colorado Party rule, which included the 35-year reign of dictator Alfredo Stroessner, but he lacked the money and votes to accomplish much.

After opponents complained about conflicts of interest, Cartes said he transferred his ownership in all his companies. But his sister Sarah Cartes now runs Grupo Cartes — hardly the kind of blind trust created by Chile's billionaire President Sebastian Pinera.

"Before, you had Lugo who had no support," Holder said. "This guy can say, `You're in, you're out' and make it stick. This guy will have real power in Paraguay."