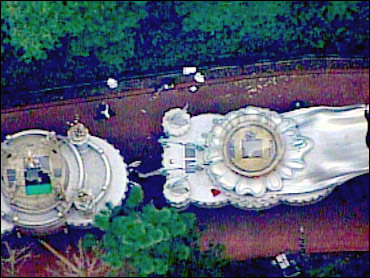 A costumed worker was killed after being run over by a float during an afternoon parade at Walt Disney World on Wednesday.

The death occurred in a backstage area of the Magic Kingdom, near the Splash Mountain ride, said Jim Solomons, a spokesman for the Orange County Sheriff's Office.

Disney spokeswoman Rena Langley said Javier Cruz, 38, of Orlando, was about to enter the park when he was hit, and she wasn't sure if any visitors witnessed what happened. He had worked at the park for eight years.

Disney spokeswoman Rena Callahan said Cruz was toward the end of the parade and was about to enter the park when he was hit. Callahan said she wasn't sure if any visitors witnessed what happened.

"To my knowledge there has never been an accident like this before," Callahan said. "Clearly, it's a difficult and tragic day for all of us."

The Orange County Sheriff's Office was investigating, and the Occupational Safety and Health Administration also was sending an investigator.

"The investigation shows it to be accidental," said Carlos Torres, a spokesman for the Orange County Sheriff's Office.

The last time a worker died at Walt Disney World was in 1999 when a part-time employee who had been working in the loading area of the Magic Kingdom Skyway fell to his death. The Occupational Safety and Health Administration later fined Walt Disney World $4,500 for what it called a "serious" violation of safety standards. The ride was closed later that year.

The death occurred as Disney chairman and CEO Michael Eisner and other top executives were at the resort for a conference with investment analysts. Cable television giant Comcast Corp. made a surprise bid Wednesday to buy The Walt Disney Co. for more than $54 billion.