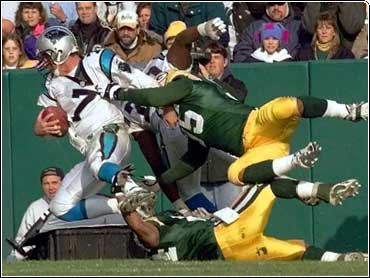 Steve Beuerlein seized the chance to be a hero. Brett Favre never got the opportunity.

Beuerlein completed a magnificent day by rushing for a 5-yard touchdown as time expired, giving the Carolina Panthers a 33-31 victory over the Green Bay Packers on Sunday.

Beuerlein, who was 29-of-43, picked apart the Packers' confused pass defense for 373 yards and three touchdowns. He also led the pandhers on a 63-yard drive in the final 3:52 for the winning score.

"That's not one of my fortes," Beuerlein said of his scramble and dive. "Five yards is about my limit. We were trying to catch them off-guard, and it worked."

Beuerlein was mobbed by his teammates moments after he took the fourth-down snap, dodged through the swarm of linemen in front of him and dived over the goal line while being hit by two Packers.

The Lambeau Field crowd, which saw Green Bay lose at home in December for the first time in Favre's career, sat in silence.

"That's about as much fun as I've had in winning a game," said Panthers coach George Seifert, who won two Super Bowls with San Francisco. "You can't say enough about Steve. He just kept bouncing back."

"I've never been involved in a play like that to win a game," Beuerlein said. "Fortunately, (Seifert) had the confidence in me."

A clock management blunder by Packers coach Ray Rhodes took the ball out of the hands of Favre, who led three last-minute comebacks this season.

Rhodes, who had three timeouts, allowed 40 seconds to run off the clock after Wesley Walls caught a pass at the 5 on third don with 45 seconds left. Afterward, Rhodes couldn't articulate his strategy in the final minute.

"I'm miffed at myself about it," Rhodes said. "I don't know how much time I could have left our offense, but I was hoping to at least leave them something, and I didn't get that part done. ... The idea was we had one play to make and get us off the field."

Favre, who said he lobbied Rhodes for a timeout, chose his words carefully.

"We could have thrown for 500 yards today," Favre said. "I was hoping we would have the ball last, especially at our place."

Favre lost a December home game for the first time in his eight years with the Packers. He also suffered his first home loss in a game with temperatures of 35 degrees or less, though the weather wasn't a factor on a crisp, clear day at Lambeau.

The Panthers appeared to have the game won with 58 seconds left when Beuerlein hit Walls with an 8-yard touchdown pass. But officials reviewed the play and ruled Beuerlein crossed the line of scrimmage to make the throw.

"It looked bad then," said Walls, who also caught a desperate 18-yard pass on fourth down just moments before Beuerlein's heroics. "The momentum changed, but we didn't let it bother us."

"It's beyond me how we could play this bad at home," Packers safety LeRoy Butler said. "Some of their guys were so wide-open, you could almost underhand them the ball."

Patrick Jeffers had 147 receiving yards and two touchdown catches for the Panthers, who scored on all four of their second half possessions.

5 on Beuerlein's winning run in a back-and-forth game that featured eight lead changes and poor pass defense from both teams. Favre and Beuerlein were rarely pressured and frequently threw to wide-open receivers.

Favre was 26-of-38 for 302 yards, throwing touchdown passes to Antonio Freeman and rookie Donald Driver. Favre also topped 30,000 career$pqqsing yards, becoming the 23rd quarterback and the third-youngest to hit the mark.

Green Bay took a 31-27 lead with 4:00 to play on William Henderson's 1-yard dive, capping a 52-yard drive. Keith McKenzie had an 18-yard interception return fr a touchdown in the first quarter.

Dorsey Levens missed his second straight game for the Packers with bruised ribs.