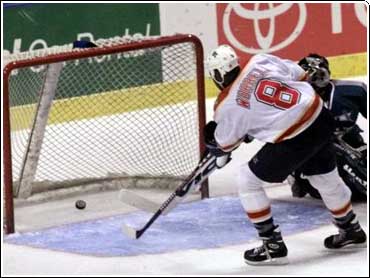 Ray Sheppard is starting to pay dividends for the Florida Panthers.

Sheppard, re-signed in November to provide veteran leadership and scoring, snapped a three-month draught with two goals and an assist Wednesday night, leading Florida to a 4-1 victory over the San Jose Sharks.

The Sharks, coming off an 8-0 Tuesday victory over Tampa Bay, are 1-6-1 in their past eight games and 0-2-4 on the road against the Panthers.

Sheppard, who used to play for the Sharks, had just three goals and three assists in 22 games since rejoining the Panthers.

"That's why we signed Ray Sheppard, to score some goals," Panthers coach Terry Murray said. "In a conversation we had, he strongly reinforced the fact that he can get the job done and he proved it here tonight."

Former Sharks goalie Mike Vernon had 25 saves to boost his Florida record to 8-5.

"It's always nice to beat your old teammates," said Vernon, who played with San Jose for the past two seasons before Florida traded for him on Dec. 30. "There's no doubt I was a little nervous going into it, not knowing what to expect after they scored eight against Tampa, and they're usually good in back-to-backs."

Viktor Kozlov, after a three-assist effort in the All-Star game, set up the Panthers' first two goals.

"This is my job," said Kozlov, another Sharks' castoff. "It's nothing personal. I just want to get the two points."

Sheppard, who played for the Sharks briefly in 1996 before helping the Panthers to the Stanley Cup finals, backhanded in his own rebound past Steve Shields for a power-play goal at 4:26 of the first period.

"I wasn't real happy with my game but I knew I could still score," Sheppard said. "I never doubted my ability, I was just angry at myself."

Peter Worrell snapped a 24-game goal draught when he swept in a rebound of Kozlov's shot at 14:25.

Sheppard made it 3-0 at 16:26 of the second when he scored on a breakaway off a long pass from Ray Whitney, another former Shark. It was his fifth goal of the season and 352nd of his career.

Jeff Friesen's blistering slap shot ended Vernon's shutout bid at :36 of the third, cutting the deficit to 3-1. Friesen's 20th goal was set up by Jeff Norton and Owen Nolan.

"We weren't ready," Nolan said. "We knew we were playing a better hockey team tonight than when we were playing the Tampa Bay Lightning. We didn't play physically, we didn't do nothing."

Cam Stewart dashed any hopes of a Sharks' comeback with his seventh goal at 3:54.

San Jose, 3-7 on power-play chances against Tampa, was 0-for-5 on Wednesday.

"I think there was a huge difference in the energy level tonight," San Jose coach Darryl Sutter said. "I don't think we had the juice."