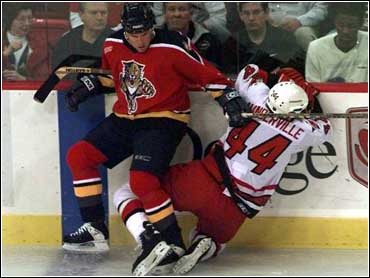 Paul Maurice said earlier this week he wasn't worried about a series of third-period collapses. Maybe the Carolina Hurricanes coach needs to rethink his assessment.

Carolina's worst period of the season haunted the Hurricanes again Thursday night as the Florida Panthers scored three times in the third in a 4-2 victory. The victory snapped Florida's season-high three-game losing streak.

"The game opened up quite a bit in the third period and I don't think that was necessarily a benefit to us," said Maurice, whose club has been outscored 63-42 in the final period.

"That's the way it goes. If you're not going to sink goals you get burned at the other end."

Ray Whitney scored the game-winner with 9:41 left, and Florida goalie Mike Vernon made 27 saves for his 363rd career victory.

"In the last month or so we haven't been playing our best hockey," Vernon said. "Tonight was a better indication of how we can play as a team. We did a lot of little things right."

The first-place Panthers, playing on consecutive nights and for the third time in four days, moved five points in front of streaking Washington in the Southeast Division.

"We tried to play some ugly hockey here tonight and I hope we did," Florida coach Terry Murray said.

The loss prevented the Hurricanes from gaining ground in the race for the eighth and final playoff spot in the Eastern Conference. Carolina is three points behind the idle New York Rangers and now in 11th place after a win by Montreal.

The Hurricanes hit the road for four games after going 1-2-1 on their four-game homestand.

Rob Niedermayer scored an empty-net goal with 8.6 seconds left to ice it.

Carolina was 0-for-4 on the power play against the Panthers, who have killed 55 of 59 short-handed situations over the last 16 games.

Paul Laus scored on a rebound 3:51 into the third period to give the slumping Panthers a short-lived 2-1 lead. Paul Coffey tied it three minutes later with his sixth goal of the season.

But Whitney was able to work a nice 2-on-1 with Mark Parrish to score his 23rd of the season and third game-winner, easily beating Arturs Irbe.

NHL goal leader Pavel Bure was held without a point for a second straight game for only the fourth time this season, while Laus' goal was only the ninth in 444 career games for the Florida defenseman.

Vernon gave up a soft goal to O'Neill, who broke down the left side and lifted a backhander through the legs of the Florida goalie 3:53 into the game.

Less than seven minutes later the Panthers tied it when Laus' soft shot from the point was tipped in by Ryan Johnson.

Carolina defenseman Glen Wesley, who assisted on O'Neill's 17th of the season, returned to the lineup after suffering an eye injury. But the Hurricanes were still without leading goal scorer Sami Kapanen (shoulder) and Gary Roberts (groin).